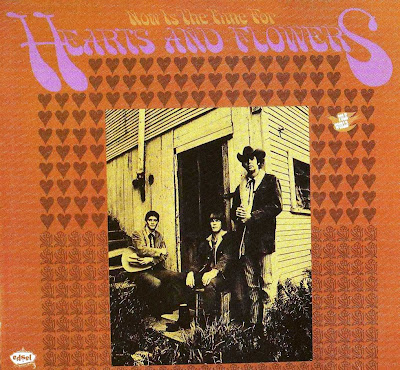 Quality: 4.5 out of 5
Trip-O-Meter: 4 out of 5
Hearts and Flowers were a group of musically-inclined time travelers who arrived in 1967 from the futuristic year of 1970 in order to attempt and make the world a groovier place. Yeah, the more likely story is that this So-Cal band was just a touch ahead of its time, but they do so in such strangely specific ways. Sure, the early Byrds and acoustic folk music are pretty obvious influence, but how is it that they seem to channel the sounds of the later Byrds, Crosby, Stills, and Nash, and and late 60's-early 70's L.A. hippy cowboy rock in 1967? I suppose that we'll leave that one to the quantum physicists, and turn our attention to this stellar set of psychedelically-tinged country rock, which comes straight at you dressed in a sonic Nudie suit. A few months ago, I reviewed a few Beachwood Sparks album and noted their clear affinity for the Byrds and Gram Parsons 'cosmic American music,' but now I'm thinking that that band simply had a few Hearts and Flowers tracks stashed away in the more secretive layers of their brains. Hell, as much as I dig Gram Parsons, I think these guys are a better fit for the whole 'cosmic American' thang. It could be their harpsichord that seals the deal.
This plays as a great complete album. None of the tracks are duffers. The folk influences infuse "Try For the Sun" in a purer way that most rock bands tend to muster. "The View From Ward Three" provides us with a country two-step, a quivering fiddle, and a touch of psychedelic guitar in a very groovy mix. Head for "Rock and Roll Gypsies" or "Save Some Time" to hear these guys vocally predict the Crosby, Stills, and Nash blend. "Please" sounds sort of like the Byrds if they were led by Lee Hazelwood, which turns out to be a pretty fine idea if you accept this tune as evidence. While we're on the topic of the Byrds, "I'm A Lonesome Fugitive" would've fit right on their "Sweetheart of the Rodeo," which didn't see release until a year later. While they don't betray their earthy roots, the band save their most psychedelicized blast of sound for the closing "10,000 Sunsets."
I don't know why I've never come across this band until recently. It's a pretty top shelf collection of hazy country rock. They certainly had the game down ahead of some of the A-listeners, and most of these tunes are pretty much in the same league as those more famous folks. I'd definitely be willing to grant this one a 'lost classic' status. There's apparently a second, more psychedelic pop album from a somewhat different line-up of the band as well, although I've yet to hear it.
Posted by Dr. Schluss at 10:36 AM

Thanks Dr. Schluss! I was really wanting some Cosmic Country and I can't wait on checking this stuff out. Speaking of psychedelic subgenres that don't get much attention, when are you going to put some psychedelic soul on your blog. I think the Temptations' 1990 is right up your alley!

You stumbled across one of my absolute favorite psych-country-rock gems! as good as this first album is, their second is a whole different level in my opinion. Some of the tracks, such as (Leadbelly's?) When I Was a Cowboy and (Arlo Guthrie's) Highway in the Wind, wouldn't sound out of place in Beachwood Sparks' Once We Were Trees!

There is a 2CD set with both albums and another album's worth of additional tracks. A real must!!

Hey Doc,
Is there anyway I could contact you regarding this post other than here? Maybe an email? I will explain why in the email :)
Thanks!

I have got a few requests: Tame Impala - Innerspeaker, Hansson & Karlsson - Monument, Bo Hansson - Lord of the Rings

All of them are great albums.

i saw them at the ice house in glendale california at the end of the sixties and i can still feel the good vibrations . they were more folk back then and a great group. only wish there was more music to hear.thanks very much.

The reason they sound like the other groups you mention is because they all came out of the same melting pot, The Troubador, in the early 60's. This album was released in '67 but the group formed in '65. It's very interesting to dig into the folk-rock scene in that period and see how it morphed into the country-rock scene, often involving the same characters.

I've only known one track by these guys ("Tin Angel"). I'm psyched to hear the whole album. Thanks as always!

Tin Angel is the only track I know well, too! Just been listening to it on my iPod - only wish it was longer, especially the last minute or so; they really get a good riff going. Going to have to get the album off iTunes, I think! Thanks for the info.