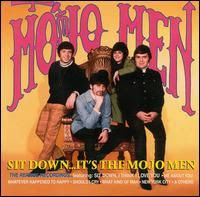 Quality: 4 out of 5
Trip-O-Meter: 3.75 out of 5
This compilation covers the second iteration of the Mojo Men, who sprang forth from the primordial San Francisco scene. They started off as a more garage rock affair, but had added singer/drummer Jan Errico and ambled off into fields of folk-rock and sunshine pop. The other big early San Francisco band, Autumn Records labelmates the Beau Brummels, were arguably a little better, but the Mojo Men throws out more sonic signposts to the later explosion of Bay Area rock n' roll. Jan Errico comes across like a less intense version of Grace Slick (who was of course the legendary Starship vocalist), and the folk rock strut here is not too far removed from the Jefferson Airplane's first album with Signe Anderson. You'll also hear some very groovy early touches of psychedelia, and a sunshine pop sheen borrowed from the Mamas and the Papas. It may be heresy, but I think I dig the Mojo Men a little more than that particular musical (kinda) family. There's a touch of the Buffalo Springfield lurking around as well, which makes sense since Steven Stills penned their hit, "Sit Down, I Think I Love You." Round two of the Mojo Men never resulted in an actual album, but we get their awesome singles, some of which include the arranging talents of Van Dyke Parks, and a few tracks from an aborted album.
The production here is nice and chonky, and the sound makes most of this sound like a coherent even though the music is sources from several different places over a two year period. "Whatever Happened to Happy" is a prime sunshine pop singles, with some space echo adding just the right of trippiness to a fine melody. Of course "Sit Down, I Think I Love You" did make it to the charts, and it's a classic folk-rocker. Most of the tracks here are pretty stong, but I really stand up and take attention to "What Kind of Man," which evolves into a full blown psychedelic raga jam. I typically don't dig horny rock (y'know, of the brass kind - am I just digging my hole deeper?), but the arrangements on "Flower of City" does set the song on fire, and if you pay attention, there are also some nice pizzicato strings. The band occasionally threatens to ring the cheese alarm, but they only manage to do so on "Do the Hanky Panky." Really, though, I can't blame the band. Not even musical Jesus can save that song (along with "The Hippy Hippy Shake," which fortunately does not appear on this album).
This is an essential collection for a variety of you seekers. Historically, it's a not-so-missing link on the road to San Francisco rock. It's also prime rib for those that are squinting for sunshine pop. But most of all, it's a catchy set of lite psych, where all of those light touches are primed for maximum grooviness.
Posted by Dr. Schluss at 11:15 AM

Let me introduce my blog about psychedelic music - PSYCHOSONDA.

This file has been identified as a copyright protected work and cannot be distributed using MediaFire.