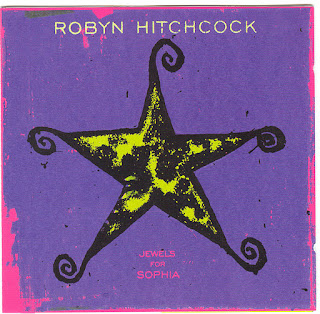 Quality: 4 out of 5
Trip-O-Meter: 3.5 out of 5
This is sort of the starting point for the modern day Robyn Hitchcock vibe, and it's probably the album of his I've listened to the most. I grabbed a promo copy of this one in a groovy purple case at the university radio station that I used to DJ at, although I subsequently lost it to an old girlfriend (although in full disclosure, I probably deserved it). I recently came across a copy of it again, and realized that half the songs on here have been bouncing around in my head for the past 12 years. This is Hitchcock's songwriting at it's catchiest, and the indie rock royalty groove is boosted with the jangling guitar of R.E.M.'s Peter Buck on a few tracks.
Opening track "Mexican God" gets a prime spot in the top of the pops of my head, and the fine lyrics ("Time will destroy you like a Mexican god.") are shored up with an acoustic arrangement backed by a slowly pounding beat. My band at the time of this release seriously considered taking on the name of this track - that or the absurdly referencing 'Sexxxican Gods.' 'Viva Sea-Tac' is a mildly dopey, but infectious stomping ode to Hitchcock's adopted home base. 'I Feel Beautiful' and the closing title track pretty much own the psychedelic ballad, while 'Sally Was a Legend' and 'Elizabeth Jade' are endlessly catchy rockers that suggest what Syd Barrett would have sounded like fronting an indie band. And I'd be remiss not to mention the infamous hidden bonus track paranoidly ranting on about Gene Hackman.
I don't think that this one typically tops most people's list of Robyn Hitchcock albums, but it's pretty near this top of mine. With some wonderfully crisp production and some lyrics that sound hit in the head with a psychedelic paddle, it'll at least keep you entertained for three quarters of an hour. We'll give a pass to the already dated album cover, which would probably be a fitting one for the worst of Sarah McLachlan.
Posted by Dr. Schluss at 12:14 AM

I want listen bad but every time I download the file, I am not able to open it on my computer. Any advice?
-G

Never mind, I figured it out!

Wow -- I didn't know this album -- we've been playing it all weekend and will definitely check out more of Robyn's work. Thanks!

Want To Boost Your ClickBank Commissions And Traffic?