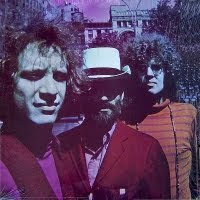 Quality: 3.75 out of 5
Trip-O-Meter: 4.25 out of 5
The somewhat unverified claim behind this album is that it was actually recording back in 1964, making it one of the first (if not The first) white boys ragas put to tape at a time when the Beatles still just wanted to hold your hand. If this is true, then these boys certainly deserve some props, although later folks of various colours would certainly top the achievement of sound found here. Still, this is a very groovy raga and coasts along nicely as it bops through your brain. It makes me think of that time about ten years ago when I visited San Francisco and jammed with a bunch of hippies in a century old house. If nothing else, this rather short album will likely send you into that psychic zone as well.
We've got two tracks here, although it's a casualty of a vinyl split and really amounts to one tracks. Really, the whole thing is a sonic mantra and pretty much stays in the same groove with some cycling instrumental and vocal parts wafting in and out of the mix. You've got your trance-like acoustic guitar augmented by bongos permeating the entire thirty minutes. There's also plenty of bohemian flute cropping up competing for time with some stoned, wordless chanting vocals. Honestly, that pretty much constitutes the beginning and end of this release. There's really no variation, but the gentle floating, western raga will transport the minds of those of you inclined to follow this thing.
Really, after the first thirty seconds, you'll have a pretty good idea if you're into this or not. I find it a pretty enjoyable affair, but it all comes down to a question of taste. Are you down with the manically strumming hippies or aren't you? Fortunately, the smell of this thing is more of the nag champa variety, and not that patchouli scent that makes me run out of the room in terror.
Posted by Dr. Schluss at 12:43 AM

I don't know who the other two guys are, but the guy in front on the cover is Buzzy Linhart, who had a modest career on his own, as well as having played vibes on Hendrix's "Drifting" from Cry of Love. I would highly recommend Buzzy's album called "Music", which, IMHO, is a genuine lost classic. Not exactly psych, but some great funky rock with Buzzy's unique singin' and scattin'tying it all together.

The Seventh Sons were known to back up Fred Neil on occasion.

Rather boring, I'd say.
I own this cd since probably 6 or 7 years now, and I never come around to actually listen to that crap again ... One of the worst ESP releases. The Godz are GREAT compared to this. And I really don't like the Godz that much aswell.
I also don't get the "Raga" connection. For me this stoned-out-of-our-minds simple guitar strumming doesn't have to do anything at all with a true Indian raga. Just a question of hype IMHO. WE were the first band that were into Indian ragas before anybody else ... yawn!