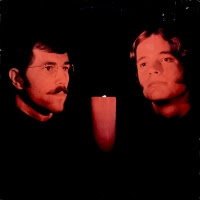 This blinding blast of sunshine pop arrived from parts unknown (to me at least) back in 1969. Although it's a private pressing extreme obscurity, the squeaky clean sounds found here do rank up the big boys. The production has a nice snap, crackle, and pop, and at least fits into the same ballpark as yr. Brian Wilsons or Curt Boetttchers, even if this album doesn't quite touch that upper pantheon. The songwriting is a fair sight cheesy - but that's really the norm for sunshine pop and most of these tunes are solid constructions. As a warning, though, this is one of the 'whitest' albums that you'll ever hear. Don 'No Soul' Simmons and his brother from the Methodist commune (this is only a guess - I have pretty much no infor on the background of this set) hit all the right notes, but in an extreme 1910 fruitgum company barbershop quartet sort of way. I recommend chasing this album with some early Funkadelic or something.

The songs are pretty much custom fitted for the sounds of late 60's AM radio, we're in the twilight zone between the Grass Roots and Sagittarius on this one. "Your Loving Voice" is a catchy, blue-eyed, porcelain doll, soul ditty that is practically repeated at the start of side two as "Back in Circulation Again." Oops! "Pretty Woman" (not by Roy Orbison) and "Sunday Dawning Morning" are some gleaming shards of sunshine that much be in some parallel universe's top 40, where Jaim still play Vegas and have middle-aged panties thrown at their heads nightly. They nail the lyte-psych pop ballad twice with "Running Behind" and "Ship of Time." These are the sort of tunes that Greg Brady could have chased the girlies with as Johnny Bravo. The not-particularly-authentic-touch of bossa nova on "As the Sun Meets the Sea" does manage to brand the tune as an album highlight nonetheless. Only on "Sparkle In Her Eyes" does the cheese level rise to the point where I end up vomiting on my record player (not that I actually have this on vinyl).

If you've got the stomach for hardcore sunshine pop which comes from a land where 'R&B' only stands for 'recreation and bicycles,' then you'll find that this is a lost classic of the genre. Despite the albums obscure and vague origins, it does have the professional-sounding spit and polish that this kind of music needs to really work. It's still funkier than Harper's Bazzar. Don't you dig the cover shot, too? It's like they're about to include you in their satanic, death-cult ceremony. That's not what this music sounds like.
Posted by Dr. Schluss at 11:20 AM

A really quite good album. So much better than other efforts by those TRYING to do the same thing. Very competent and original notwithstanding the modest cost.

If you are looking for stuff that really rocks out, don't bother, but if you like nice melodic and at times thoughtful music, this is the stuff.

Thanks for posting this.

"If you've got the stomach for hardcore sunshine pop which comes from a land where 'R&B' only stands for 'recreation and bicycles..."

It phrases like this that make you one of the best in the biz, bub.

Link is dead can you repost?

Any chance of Repost? Thanks