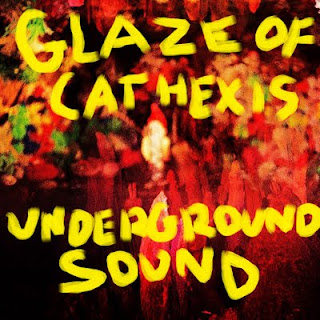 My original intention for this album was to create mono and stereo mixes to bring out the 60's style grooviness for this album, but some technical difficulties got in my way last year and I just released the mixes that I had. In fact, my work folder for the album was titled 'Mono/Stereo Album.' Fortunately, I found some ways around those problems last month and got these mixes together. The stereo mix is my attempt at a psychedelicized early 1968 vibe complete with ridiculous stereo separation, while I tried my best for an old school mono punch on that mix. If you've already downloaded the album and dig it, take a chance with these versions. If you're new to this and really want the first mix, they remain linked at the original post. Here are the notes I posted last year for the collection:

Here's the new set of Glaze of Cathexis recordings, which has been percolating since May 2009. It was originally going to be a sort of stoner metal thing, then a folk rock affair, and finally I just went straight for the marrow of my favorite 60's bands. 'Pala Ferry' has some elements of all three of those mindsets. This is a lot more guitar heavy than the last set. Every track here is anchored by guitar, and I just went to the Moog synth a few times to add some rubbery density. For once I had the opportunity to record some actual drums, so you get my spazzy drumming all over this album as well as a little bit of drumming from Gonzoriffic filmmaker Andrew Shearer. Hopefully you'll dig these psychedelic rock sounds. Here's some song notes for those of you who have the yen to listen:

Pala Ferry - At various times I was aiming for R.E.M., mid-period Byrds, and Dennis Wilson on this track. I think the Beatles 'Rain' was stuck in the back of my head as well. Lyrically, this is an invitation to join my cult, which doesn't actually exist. I always got that sort of vibe from the Millennium's Begin, which was my first post on this blog and is one of my absolute favorites.

Further Instructions - Here I'm commanding you to do abstract and impossible things. In my head it was going to be a fireside, smelly hippy folk rock chant, but then some Talking Heads style beats, Chuck Berry guitar riffs, and the goofier side of the Beach Boys backing vocals invaded my muse as well. This comes in second as I wanted to continue laying down the groundwork for my meaningless cult.

Launch - I'm not sure what this one's about lyrically, but I wanted to go for a Black Sabbath sort of riff heavy song. Some Cream found its way into the wah-wah'ed out lead guitar as well. Apparently my attention span ran out as the coda takes a sudden and strange turn into electronica.

Sign From Your Face - This is another one from my folk rock phase, and I was going for a Rubber Soul sort of vibe here. One with the Harrison parts being beamed in from the early 70's. My original vocal take tried to emulate Lennon and Dylan all at once, but it sounded ridiculous so I ended up dialing it back for this finished version.

Blues For A Red Planet - This is from a basement jam with Andrew Shearer on drums and myself on rhythm guitar. For the overdubs, I ran my Moog for a vacuum tube for the first time, and I kind of got off on it. I couldn't find my guitar slide for the lead guitar overdub and ended up using a plastic ear cleaner instead. The title is from an episode of Carl Sagan's Cosmos, which you should all watch right now.

Sometime With You - This song has been bouncing around in my head since my university days ten years ago, so I had to record it just to get it out of my damn head. Actually, the lyrics in my head were far dumber, but I was able to get away from those.

My Little Utopia - I wrote this sitting on a 50 meter cliff on a small Canadian island about seven years ago. I re-extrapolated the melody of the Dean Martin standard 'Melodies Are Made of This' for this track, but if Brian Wilson can get away with turning 'When You Wish Upon a Star' into 'Surfer Girl,' I might be safe.

City of the Domes - My buddy had just put a bunch of Iron Maiden onto my ipod, and I got the urge to write that kind of guitar riff and meld it with a tacky sci-fi reference. When it came time for the vocals, I found that I couldn't do a convincing metal growl, so I defaulted to glam Bowie instead. The electronic coda here has a little more relevance if you've spent some time with the strangely awesome film 'Logan's Run.'

Cliffs - I wrote this one back in 1999 on a bit of a bender in my college dorm room. I had recently been introduced to Syd Barrett's music at that time, so this is one of the Barrett-iest tracks I've come up with. I could never get quite happy with a recording of this, but it turned out that it needed those swinging Soft Machine-style drums.

Visions of the Unreality - This is another basement jam with Andrew and myself. My frequent collaborator Scott Atkinson crops up here with a bit of visionary poetry. It's actually the first time we've worked on music together while in the same room (or same country for that matter).

It Means a Lot - Ironically, the lyrics pretty much mean nothing. I set out to rip off "Yur Blues," but got sidetracked by another period of obsession with the Doors, and then decided to top it all off with my Dylan vocal impression. I guess I was getting into that whole Dukes of Stratosphear 'be your favorite band' sort of vibe.

Centrifugal Bumble Puppy - A gold star for those of you who get the title reference. I set out to write a song of my surreal and false triumphs, with each line starting with "I" and then a different verb. Music wise, I wanted to do a 'dude' version of the dronier and harder rocking Stereolab tracks.

Taking the Time Out - This one kept popping up in my head as a crappy emo punk song, but I think I successfully guided it into 'Who' territory instead. If I ever make it onto a neo-Nuggets compilation, I could imagine this being the one.

Hope you dig this stuff. I'd love to hear your comments and impressions, even if you end up thinking that this is a steaming pile of poo.

Just downed your wav's and although I;ve only skipped through so far, this stuff is really smoking. Nice medicine herr doktor.
Greetings from the UK

Man... I wanted to listen to this record :( you think you can fix any link?

Everything can be found here:
http://glazeofcathexis.bandcamp.com/