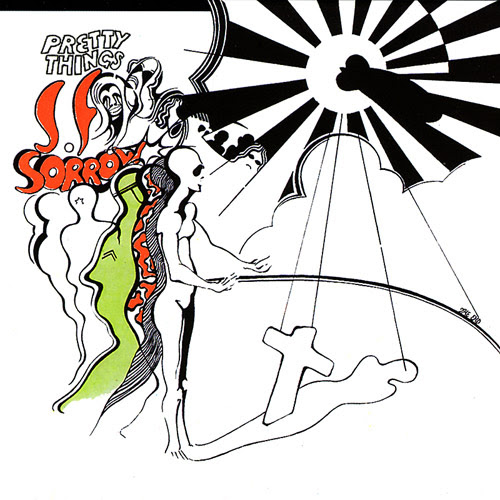 Like the other psychedelic Abbey Road albums, the mono mix is by far the superior mix. The stereo suffers from ridiculous stereo panning that dilutes the power of the band and a lack of skill in creating a proper psychedelic soundfield. Chances are a fair amount of you reading this are already perfectly familiar with this album, but it always a nice disc to revisit. If you haven't heard this, you're in for quite a treat - this could be your new favorite album.
Posted by Dr. Schluss at 11:03 AM

is this the mono or stero version?

I only have the mono on hand. I can get the stereo up sometime, but it really is significantly crappier.

I can't wait to hear this one. Thanks so much!
--K

Wow. I'm speechless. I didn't know this even existed. It is up there with Tommy for sure. Love it and thanks!

My thanks too. I didn't know of these guys or this album before your post, and am enjoying it immensely. Especially, and not unlike yourself, Baron Saturday. I also get a Bowie vibe, as from The Man Who Sold the World. I read today somewhere that Bowie had Phil May listed in his address book, not under "P" or "M", but "G" for God. You can definitely hear the influence...
You keep coming through, Doc, and I salute you.

Thank you for the mono version.

I've had the stereo vinyl of this for decades and always wanted to hear this version.

the singles released around this lp are among the pretty things finest moments on record (as is the lp itself), and the never-ending mono vs. stereo debate continues to rage on. either way, it's superb music.

You've convinced me to try it.
Thanx for reminding.

My favourite tracks are 'Trust' and 'I See You', but there really isn't a track on the album that is anything less than superb. I may be alone in this but I actually prefer the stereo version, but there you go ...

I have only heard their first album, which I dig, but this sounds right up my alley. Gracias de nuevo, doc!!

SF Sorrow.. surely one of the greatest records ever made, a psych masterpiece !

have you heard of a guy named Philamore Lincoln? made one album "the North wind blew south" in 1968(?) , but not much is known about him. couldn't find it in your 'garage', as you might not identify the man.. should give it a listen though,

love your blog, many thanx !

another link please !!!
that one is dead.
thanks in advance.

I disagree. While there are some symptoms of cheesy psychedelic mixing, and 4-track bass and drums on one side of the stereo spectrum type symptoms, I think the mono mix misses some of the overall high-end and punch and the drums are far lower in the mix. Best example, "Balloon Is Burning". The drums sound very flat and cardboard-box like in the mono mix, whereas they have more room to breathe and the kick drum has more punch in the stereo mix. The stereo mix was eq'ed far better as well. Maybe I'm in the minority on this one.

Thank you so much. I'm excited to hear this album for the first time :)

Your Mediafire link worked for me. I am curious to hear this in Mono. Are you related to Phil Spector and his "Back To Mono" movement? Not the deranged part of him. Thanks again. I also did this with Captain Beefheart at your behest to see the difference. But The Captain sounds good any which way. Thanks again!