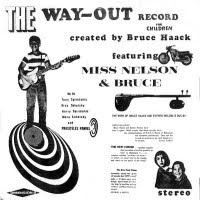 There aren't many psychedelic children's albums out there, and it's perfectly possible that all of them were made by Bruce Haack and Miss Nelson. Should you actually play it for your kid? Probably not - but I did. She seems to like J-pop better, though.
Posted by Dr. Schluss at 9:39 AM

Sounds very....er, interesting. Thanks for this one.

Good god! do you know how long ive been looking for this?!?!? wow, mega cheers dude!

hi
any chance for a reuppa?

HYI
ANY CHANCE FOR A REUPPA WITH WORKIN DOWNLOAD LINKE?