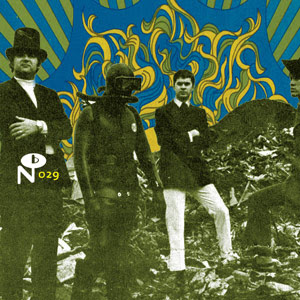 By no means a classic, A Lovely Sight is a fine listen for those already indoctrinated into the San Fran scene and/or acid folk. For the rest of you, you'll at least want to give "Mary" a try, as I see it as the one completely classic track on an otherwise pleasantly average album. Truthfully, this album is more or less just a compilation of everything the band recorded, and not so much of a coherent album anyway. If this had been my musical legacy from Illinois in the 60's, I'd feel perfectly groovy begin associated with it.
Posted by Dr. Schluss at 11:14 AM

Heloo I am a fan of your blog... but to get this one is dificult. The link said "is encripted..." Is there an alternative? tnks a lot

I dunnnooo... I think this album is WAY above average for a bunch of landlocked dudes with day jobs. Fuzz, backwards, effects, breakbeats, songs about your parents dying...it's all there. I was pretty blown away by this one, as obscure as it is. The female vocals are awesome, usually my kryptonite- especially on folkier numbers.

I'd say if you like July and the United States of America you'll love this.

Wow, just when you think you've heard all the good ones! Thank you.

thanks for posting my uncle's music on the web. He'd never do it, but I know he'll be glad to learn that people are enjoying it.

That's why I'm here - to post some obscurely groovy music.

As you can read in my review, Pisces is not among my favorite sounds, but I tried to give it some extra props my mentioning that I'd feel perfectly happy if this were my 60's Illinois legacy.

This is a great record, the band also is pretty good, excellent review.

Darn! Having the same trouble with encryption...is there a password for this doozy?