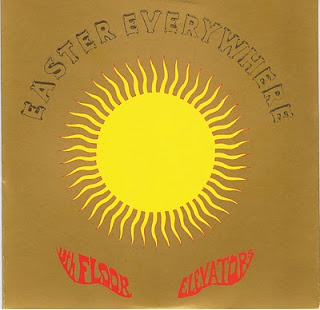 The mono mix of Easter Everywhere isn't quite as essential as the mono mix of the 13th FLoor Elevator's first album, but it's still worth a good listen. The production muddiness of the first album is not present on this one, and the stereo mix has a nice crystaline sound. That sound is replaced with the characteristic 'in your face' assault of a mono mix, so it's definitely better for a party and the rockers shine in mono. Still, highlights like the opening "Step Inside This House" and "Baby Blue" suffer a little from the loss of texture. I've also tacked on a mono mix of "May the Circle Be Unbroken," the only track from their third album with Roky Erickson in full flight and by far the most essential track from that LP. Here's my review from a few years ago:

On Easter Everywhere, the 13th Floor Elevators managed to refine their sound without sacrificing the things that made their first album so great. Roky Erickson still sounds like a madman, but here he also comes across as much more intelligent and focused. Additionally, while still a little on the low-fi side, the production of Easter Everywhere is much clearer and helps to accent the band's interplay (although the rhythm section on this album is different from the first).

Although they still qualify as garage rockers, the 13th Floor Elevators have a much more noticable folk rock sheen on Easter Everywhere. They even go as far as to include a damn good Dylan cover with "Baby Blue." On "Slide Machine," "Nobody To Love," "Dust," and "I Had To Tell You," the Elevators find a happy middle ground somewhere between the Byrds crystaline sound and Forever Changes-era Love. Fortunately for the garage rock afficianado, the Elevators pull out on the stops on "She Lives (In A Time Of Her Own),"Earthquake," and "Levitation." These helps to give Easter Everywhere a lot of diversity and make it an interesting listen from beginning to end.

Easter Everywhere provides plenty of improvements over the first LP. Tommy Hall's jug can no longer coast as a strange novelty. It appears less often on Easter Everywhere, but when it is present serves more to create an distinct atmosphere. For me it's like quantum jitters in the typical tapestry of rock music. Stacy Sutherland leaps over his already strong playing on The Psychedelic Sounds Of... His solo on "Step Inside This House" manages to inspire awe and his accompaniment on many of the tracks, especially on "Baby Blue," is graceful and impressive. He is not a flashy guitarist at all, but extremely tasteful and Sutherland always seems to choose just the right notes.

The lyrics are also much better on Easter Everywhere. Hall takes on the lion's shares of the lyrics, and while his worldview is certainly demented, he successfully sidesteps most psychedelic cliches and gives the listener something unique. It doesn't hurt that Erickson's all-for-broke singing usually complements Hall's vision perfectly. This synergy is best sampled on the opening track "Step Inside This House." It rarely makes logical sense, but it's never less than riveting.

The only misstep on Easter Everywhere is the closing track "Postures (Leave Your Body Behind)." While not a terrible mistake by any means, it does overstay its welcome at six-and-a-half minutes. I guess the Elevators had already spent their long-form song capital on "Step Inside This House," which may even be too short at eight minutes.

Easter Everywhere and The Psychedelic Sounds Of... basically comprise the 13th Floor Elevator's essential catalog. The "live" album is not as advertised and not recommended. There is also a metaphoric pantload of studio alternate takes and other live tracks on a string of compilations only recommended for those completely obsessed with the 13th Floor Elevators. The final studio album, Bull Of The Woods, is missing Hall's electric jug, and his presence as lyricist is much less. Even worse, Erickson's drug use landed him in several kinds of institutions and he is mostly absent from the album. That said, he is fully present for a mysterious and great take on "May The Circle Be Unbroken." This means the band is mostly dependent on Sutherland. He took on the challenge respectably with increased songwriting and great guitar playing, but it's still just not the same as the magical first two albums.
Posted by Dr. Schluss at 10:52 PM

respectfully to unagree w/ yr devaluation of BULL... being the poppiest, plus the presence of more Roky than you seem to hear/acknowledge. my favest cut of all their songs might be Dr Doom!
but those samey-yet-distinct problematic-yet-perfect tunes on BOTW hold up i say! i love the drummer thruout, esp. his pattern on the opening song.
so i prefer 3-2-1 -in order- of their sides!

ps...
[if you look A LITTLE in cyberspace you may find my humble attemptS at 2 versions of Roky's STARRY EYES]

"Bull" isn't necessarily a bad album; in fact it's quite a showcase for guitarist Stacy Sutherland. While it's a pretty good album as far as 60's garage-psych goes, I feel that it's missing a lot of the quirks that made the Elevators who they were. I have to admit that I listen to it far less often than the first two.

Thank for giving the 13th Floor Elevators some respect. I've always loved them and what they have done for music. I love Roky and Austin Texas in general. Thanks for this.

The link is dead... Could you please, please reupload?

I just used the link. You should try again.

Always loved both these great albums, but why do both yours - 13th Floor Elevators - The Psychedelic Sounds Of (Mono)& Easter Everywhere (Mono) have some songs duplicated with different running times?

A re up would be great if someone could be so kind.