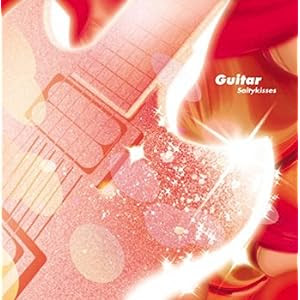 Unfortunately, Guitar's "saltykisses'" aren't really as awesome as their "sunkisses." It's a little hard to get a grip on Guitar's discography, but I believe that this qualifies as their 'sophomore slump.' Group mastermind Michael Luckner was clearly trying to expand his palette or sounds, but seems to have abandoned a bit of his muse in doing so. This album takes aim at including more acoustic sounds and touches of indie rock without quite hitting the mark, but tends to sideline the immaculate walls of tripped-out sounds found on Sunkissed. Still, there are a few definite winners on this disc.

"At the Seaside" features male vocals, which the previous album did not, and actually manages to best the tracks found on Sunkissed. The songwriting is sharper, and the production is a little more gritty, which serves to make this come across as sounding like a great, lost Loveless outtake. "If I Didn't Meet You" is the best of the more stripped down/downbeat flavored tracks and is one of several tracks to feature vocalist Ayako Akashiba. "Saltyme & Saltykisses" serves up the best psychedelic, shoegazer sound trip on the album, while the instrumental "I Dream the Sand" is a fun backward looping ambient track, although it's not as great as "Hot Sun Trail" from the previous album. The other tracks tend to be a little bland, but the only one that I absolutely need to skip is the folk misfire "Jodelei," which actually features yodeling.

Definitely begin your exploration of Guitar with Sunkissed. I bought this album four years ago due to its entertainingly Loveless-aping cover, but it took me four years to give another album of theirs a shot (and that one turned out to be fantastic). Still, you'll find a few songs here that nicely supplement their first.

If you want your ex-girlfriend or ex-boyfriend to come crawling back to you on their knees (even if they're dating somebody else now) you got to watch this video
right away...

(VIDEO) Win your ex back with TEXT messages?