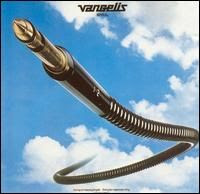 As far as I'm concerned, Spiral is Vangelis' masterpiece. Much of the prog and rock influences from his past couple albums are minimalized in favor of trance-like sequencing and a wide stage for the spacey synthesizers. It's a little more of a minimal approach, but it allows for Vangelis' melodies to shine through without coming across as cluttered and pompous as my least favorite parts of Heaven and Hell did.

The opening title track has a massive sound backed by a properly spiraling sequencer. This is more like the sound of opening up the gates to Heaven or Hell - your choice which. "Ballad" employs some early vocoding while the grooving "Dervish D" is a perfected form of the electronic groove that Vangelis was playing around with on much of Albedo 0.39. You may note that "To the Common Man" is awfully similar to Vangelis' later Oscar-winning "Chariots of Fire" theme. This more understated track is far superior, though. The album closes with a track somewhat similar in structure to "Spiral," but ends up sounding more like the Electric Light Parade at Disneyland and is the only mild misstep on the album.

Although he doesn't quite make it all the way, Vangelis comes within spitting distance of the rarified electronic air of Klaus Schultze on Spiral. Still, Vangelis' melodic gifts come across well and make this a must hear for fans of 70's electronica.

Thanks for all the Vangelis. Really looking forward to listening to all of it.