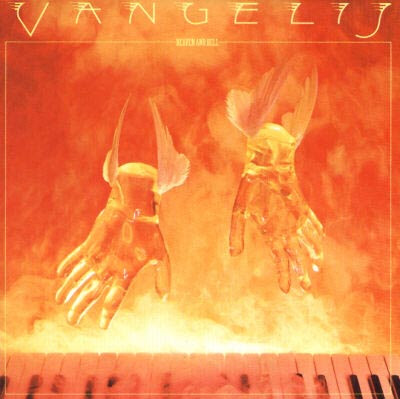 The way I see it, Vangelis has had four major periods in his career. There's of course his mostly awesome stint with the psychedelic rockin' Aphrodite's Child, his insane experimental/prog period of the early 70's, his 'golden artistic period' of the mid 70's and the new age drivel period he's been often stuck in since about 1979 (there are things like the Blade Runner soundtrack which definitely get a pass). This album is often seen as the start of his most artistically valid period, but to tell the truth I'm not that enamoured with Heaven and Hell. The are some touches of synth and melodic genius sprinkled throughout this record, but Vangelis was going for an orchestral prog vibe that tends to turn me off. If you're into that sort of thing, expect to add another point to the 'quality' meter.

This appears to be a side-long track sort of affair, but I think it would have been a much better for the big 'Heaven and Hell' suites to be split up, or at least given names. It hard for me to conceptualize what's here and separate the wheat from the chaff, so to speak. "Heaven and Hell Part One' starts of well, but the choral vocals get pretty silly a few minutes in and it veers a little too far towards the orchestral prog vibe for my taste. That said the last few minutes of the 15 minute long suite is the music used for the theme to Carl Sagan's Cosmos, and that stands out as one of my favorite pieces of music in general. It's just too bad that I either have to fast forward or listen to pompous choruses and synth themes bellowing into my ear. "So Long Ago, So Clear to Me" doesn't appeal to me at all. Word on the street is that Jon Anderson of Yes and Vangelis were an inspired pairing, but it seems like the most hellish thing here in my view. "Heaven and Hell Part Two" fairs a little better with it's ambient vibe, but there are still a few sections where I see happy elves dancing in the shire or Lord of the Rings pomp instead of the more tripped out soundscapes that I look for in the best 70's electronic records. Like part one, the final section is the spaciest and the best.

I suppose I'm being a little harsh with this album, but it's often held up as Vangelis' masterpiece whereas I prefer pretty much all of his other 70's albums over this one. Still, there are some spots of really great music to be found here, and if you dig Jon Anderson, then you'll have a nice treat under your pillow instead of the turd I found.

Older pressings of the LP had a more elaborate track listing (in parenthesis, even more details):