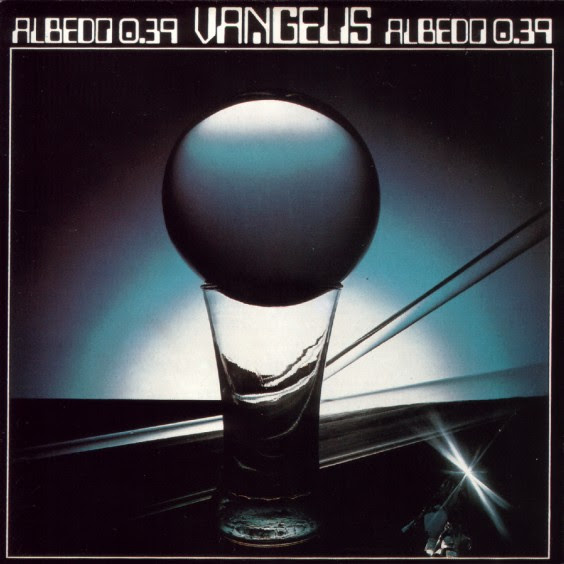 After his journey through Heaven and Hell, Vangelis saw it fit to launch himself into space. I think it suits him a lot better. This sounds an awful lot like the music that Tangerine Dream would make in the mid to late 80's (as well a Vangelis himself), but the funky, clunky analog sounds and 70's production makes this sound far better. The live drums that show up here and there help a lot too. Let's face it, music of this sort walks a fine line between 'awesome' and 'cheesy,' and the digital sheen of the 80's sent these sounds careening over the edge into a new age abyss. But we're looking at Albedo 0.39 for now, and it's the real deal. As far as the orchestral synthesized sub-genre goes, this is space music at its best.

For you Carl Sagan junkies, "Pulstar" and "Alpha" were a few of the tracks that were used in the phenomenal score for Cosmos. There might be some more here as well, but those two were distinctly burned into my head. "Pulstar" features some brains piercing synth stabs while "Alpha" is a perfect crescendo. The other major tracks here are "Main Sequence," which sound like a band of robots playing fusion, and the two part "Nucleogenesis," which most recalls "Heaven and Hell Part 1," except that it's rocked up and sounds far superior to my ears (was this one in Cosmos as well?). There are some enjoyable shorter pieces as well. "Freefall" has a touch of world percussion added to fine effect, and the star chart recitation on the closing title track is fun as well. I think most of my trance music listening is at least in part my trying to recapture the vibe of sitting in a planetarium at age 8, and this one does a fine job of doing that.

Yeah, this music is on the cusp of 'new age,' but I think that term usually applies to failed space or spiritual music. This album definitely gets the space dynamic correct. Vangelis certainly beat both 80's Tangerine Dream and his future self at their own game ten years before the fact.

Some of Vangelis's music leaves me cold. I'd never heard this before and i like it a lot!

I know the Cosmos soundtrack album is doing the blog rounds, I found it a few months ago but I will be fascinated to hear this as I think Vangelis really was at his peak around this time...Spiral is another total classic that I see you have posted..also Blade Runner is just around the corner chronologically speaking!

Listening to Vangelis is like reading a classic book in the sense that each time you delve into it again, deeper levels are revealed, the guy was/is a freakin' genius....Earth is another of my favourite albums, though a little earlier than the ones i mentioned, circa 73/74 if memory serves.

I've been meaning to listen Vangelis for awhile now. I always see his records in crates and have been intrigued. Thanks for breaking down his periods throughout the articles too. I found that interesting and well written.

Heard it in late 70's, and almost looked for up today. It brings many good memories... The gloomy vocal speaking "Albido... zero point three nine"... A BOTTLE OF ICE COLD BEER... And flight is about to start... Thanks a lot. Really, really a LOT!!!!!!

I've always been a fan of head music, and I still listen frequently to the old-school electronic prog-rock stylings of Jarre, Synergy, and Tangerine Dream. But Albedo 0.39 was the album that got me interested in the genre. One of my favorites, especially the title cut.