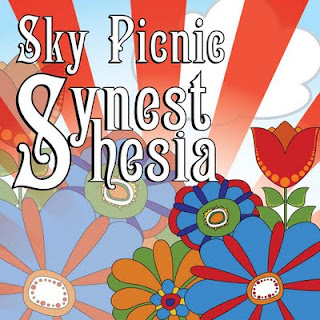 It's pretty difficult to actually recreate the psychedelic, garage-punk sound of the 60's. There's a certain sensibility in the playing, a vocal flow that is distinct for the time, and of course the need for clunky, tube-driven production. Sky Picnic is another modern group to make the attempt. Truthfully, they don't get all the way there. The production is way too clean, and I can't help but hear a touch of indie rock sensibilities in the vocals - it's fine but doesn't quite fit. That said, the songwriting does hit the nail on Syd Barrett's head and the playing would fit nicely in an underground, pop-art soaked psychedelic club. All in all this is a pretty fun listen for the heads out there. At the very least, it manages to rate pretty favorably with the better Elephant 6 bands.

"Half the Queen's Face" is definitely a winner, throwing the Floyd's "Astonomy Domine" into a blender and making an groovy beast from the acid-soaked pulp left behind. I love "Moons of Jupiter," which once again has something in common with the Floyd ("Interstellar Overdrive" for those of you not paying attention), but even more so makes me think wistfully of the fake-Chocolate Watchband's "Dark Side of the Mushroom" or "Expo 2000." "The Wise Man Lost His Head" filters in some of the more psychedelic moments of the Beatles while the closing "Sequence IV" goes for the epic, multi-part vibe, although it doesn't quite hit me in the sweet spot that the preceding three tracks do. I imagine that last one works quite well live, though.

This is enjoyable, if somewhat derivative psych-rock. But I don't think that Sky Picnic's goal is some much to innovate as to try and recapture some 60's vintage psychedelic lightning in a bottle. At this they do a pretty fine job. With hindsight as their guide, they tend to hit on the finer points of that musical era while gleefully avoiding the missteps and dross that even the better bands of that vintage occasionally stumbled into.

Visit these folks here:
http://skypicnicmusic.com/
Posted by Dr. Schluss at 8:01 AM

Please take a moment to check out my new LSD Documentary film.
POWER AND CONTROL :LSD IN THE 60's

Tim Leary's Miricle of Good friday Experiment is explored with one of the original PREACHERS who took part.

LSD and the Protest Movement, JFK & LSD plus more.

Hey Aron, thanks for the doc, very interesting and entertaining!

Hello dr schluss, could you upload the Farther in this fairy Tale album from the Sky Picnic? Thanx