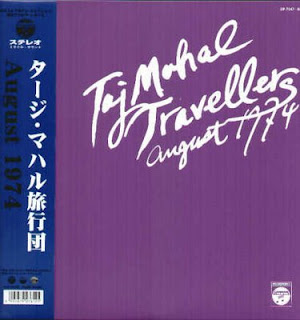 This music is pretty far out there, and seems to me to be the Japanese equivalent of the most deranged kraut rock. Using a variety of acoustics and a barrage of electronic instruments, the Taj Mahal Travellers attempted to reach as far into the sonic frontier as they could on an album side. Live, I can easily imagine that they'd continue until they simply passed out.

I have a pretty high appreciation for this album, but as the "4" rating above suggests, something doesn't completely click for me here. When we consider music this ambient and/or avant garde, it's often hard to put a finger on it, but I think it has something to do with their use of jarring noises in the middle of otherwise relaxing passages. I'd prefer to float into the ether. Another very subjective criticism would be their occasional tendency to throw in everything including the kitchen sink. That said, the first track probably ranks as the most etherial one with panning. buzzing electronic noises on top of a sea of ringing bells, marimbas, and electronic tones. Eventually some spaced-out wordless vocals enter the mix too. The second tracks produces a wall of shimming, amorphous sound (complete with kotos deep in the mix) before thinning out into a 'monks of doom' sounding choral section. "III" plunges into really avant garde sounds ala Can's "Peking O," while the final track makes me think of a prototype, way more experimental version of something Kitaro would have done when he was making music that didn't suck.

There is a lot of avant garde variation at work on this album, and it definitely one of the more psychedelic bits of music to crop up from Japan. Use it as aural room decor and see if it fits or not. It costs about the same as room decor with the current Amazon price tag of $359 for the 2001 vinyl reissue.
Posted by Dr. Schluss at 3:01 AM

Really great album. Do you have or know of any other recordings besides august 1974 and Live Stockholm July, 1971?

To be perfectly honest, I'm not even familiar with Live Stockholm July, 1971.

Merry Xmas to you!

The new Homemade-Lofi-Psych sampler is ready and can be downloaded for free here:
http://homemade-lofi-psychedelic.blogspot.com/2008/12/hlfp-03-new-kids-on-blog.html

excellent - and its firmed up my resolve to get cope's japrocksampler with my christmas tokens!
qef

An "experimental" movie about Taj Mahal Travellers on tour in '72/'73 can be seen and downloaded here: http://www.ubu.com/film/taj.html

Micro,
Very interesting addendum to the music. Thanks for the link!

at laaast i find this! cant thank you enough.

Thank you so much for the Taj Mahal Travelers!
August 1974 is great and impossible to find it seems... I was looking everywhere and then found it here.
Thanks again. Great Blog.

Great album--just reviewed it on my blog. Thanks for providing out-of-print recordings! Added you to my blogroll--would be jazzed if you feel like returning the favor!

Agra is a popular destination Same Day Taj Mahal Tour by Car of World famous Taj Mahal. We are widely travelled in the country and know the basic needs of a traveler. We have both are options for tourist visit in Agra like Same Day Agra Tour by Car or India Tour Packages .

Agra with its glorious past has lots more to offer a discerning traveler besides the mystic and splendors of the Taj Mahal. Our Car and Driver Hiring India team is dedicated 24×7 to serve you. Our tour itineraries are tailor made and have a variety of options. Many tourists desire to have Same Day Agra Tour by car and Overnight Agra Tour. Our Golden Triangle tour packages for the tourists are very attractive and provide full variety. More visit: - http://www.indiatravelwithus.com/