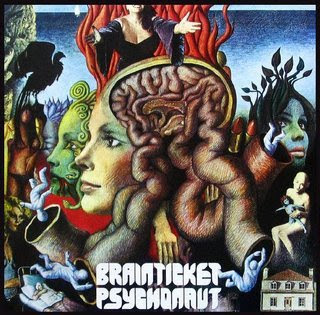 I guess that for all intents and purposes, this is Brainticket's pop album. It's lacking the extreme freak outs that color Cottonwood Hill, and while it pushes against the envelope, it doesn't gleefully plow through as the band tends to do on other releases. What we do get here are top notch, assured performances, and by far the band's best songwriting. This is pretty awesome, 70's-style psych rock. It's not a bad introduction to the band; sometimes it's nice to become somewhat comfortable with musicians before they completely blow your mind.

The first couple tracks are very liquid and chill. I especially dig the chiming piano line and delayed percussion that grace "One Morning." Things pick up noticeably for the balls out "Watchin' You." Dawn Muir's vocals cut through the thick brew, piercing with absolute conviction. It doesn't hurt to have a nice face-melting guitar solo thrown in the middle too. "Like a Place in the Sun" is a jazzy display of the band instrumental prowess while Muir is at her wackiest for this particular album. "Coco Mary" is a very pounding, driving track with a cool marimba break catching the listener off guard.

This is probably the most consistently listenable Brainticket release. The catch is that you're not hearing their 8th ring of Saturn, cosmically deranged sounds, but you do get some fine songs and
a band playing with almost telepathic communication. I suppose that in Can terms, this would be their Ege Bamyasi, and I don't feel that's a bad thing at all.
Posted by Dr. Schluss at 2:11 AM

Great description, can't wait to hear it...
the '8th ring of Saturn, cosmically deranged sounds' part makes me want to check out more!

I didn't even know Brainticket did another recording other than Cottonwoodhill. I agree with your comparison. This is a very good album if not as good/weird as the other. Thanks very much for sharing this,
Dave

On my own private trip-o-meter Psychonaut worked better than Cottonwood Hill though:) Consumed along with the white widow, Psychonaut tends to be more dense and catching, hypnotizing a bit deeper than the previous album. May be it is weaker in terms of experimentation or above mentioned "freakiness" but for a relaxation it is exactly what "the doctor prescribed":)

These stories are truly incredible. Thank you for this information. เลขเด็ด
http://betwayonline.net/
https://howtoeasy.net/

This article I have read I find it useful. Please come through my article. คำศัพท์ แทงบอล ออนไลน์ ที่จำเป็นต้องรู้
http://betwayonline.net/
https://reviewer24.org/