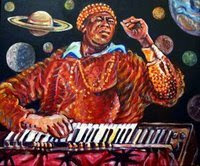 This album is far from entry level Sun Ra. For that, I'd advise you to search for the still in print Space is the Place (Impulse) or maybe We Travel the Spaceways. Granted those two albums are already worlds apart in sound. However, if you've already been indoctrinated into Sun Ra's spaceship, you know that 18 minutes of Moog-ing Ra is an absolute necessity, and you'll need to hear this.
Posted by Dr. Schluss at 2:08 AM

Hello again Dr. Schluss and Pablo. I wanted to thank you for joining my network @ http://digitalmeltd0wn.ning.com

I hope that you enjoy the place and we can get to know each other better in the future. Take care.

thanks for the sun ra.

thankyou so much- i love ra and have never heard this

Thnaks for your psycholdelic flavor!

Here you can get some cool Tracks, too: (some instrumental, some german)
http://jazzworkshopradio.wordpress.com/2008/05/13/the-eucharistischer-junge-special-kult-mp3-download/

Thanks for the music

Excellent blog-- thanks for all the psychedelia! :)

Don't forget "I'll Wait For You" on the Strange Celestial Road album. More psychedelic than anything I've ever heard any funky too.