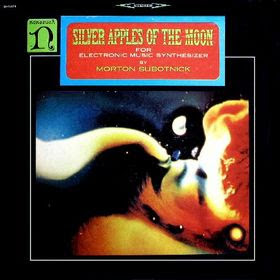 A true pioneer of electronic music, Morton Subotnick's work is usually not the easiest music to listen to, but if you're willing to give it your time and attention, it can be very rewarding. Subotnick is a classically trained composer who fearlessly pressed beyond the reaches of even the typical avant garde. Most typical concepts of melody and rhythm are thrown out the window as Subotnick works out his battles of music theory with the Buchla synthesizer.

These early modular synthesizers have no conventional interface such as a keyboard, forcing the player to work with the different variables of analog oscillations and a strange series of touch pads. 'Otherworldly' probably isn't even enough to describe "Silver Apples Of The Moon," but the playfulness and sense of intelligence helps to reveal that the machine is not taking over and there is a man behind the curtain.

As a work debuting on vinyl in 1967, "Silver Apples Of The Moon" is split into two parts. Side A is constructed around softer pings and bleeps, a probe satellite orbit the mysterious moon and slowly gaining information. While side B is somewhat similar, especially with only the Buchla synthesizer at work, we've landed on the moon. Some of the playfulness turns a little more serious and the oscillations are a little more distorted as we're up to serious work now!

Far from a pop record, "Silver Apples Of The Moon" requires that you invest your full time and attention. For those who make the effort, you'll find that a jovial spirit presides over this jungle of primitive electronic sound. It really is a landmark of electronic music and should get at least one play from anyone even slightly interested in that genre.
Posted by Dr. Schluss at 12:00 AM

Thank you for this Morton Subotnick!!! I saw some new compositions of his performed in Santa Fe, NM during the Chamber Music Festival a few years aao. Great stuff!

Hello Sir, greets from Indonesia.
Thanks for upload this stuff.
By the way, can you re-upload it again into Badongo.com?
Because in Indonesia the bandwith it's so slowly, and I try to download it in many times, always failed and never success. And always wait 1 hour limit to download it again.
Thank you for previously, Sir.
Regards.

Got it on vinyl in '68 or '69, in a discount store in Ohio (someone sold their "record department" the entire Nonesuch catalog) and wore it out on the "hi-fi". Now have the Wergo CD; still wonderful.