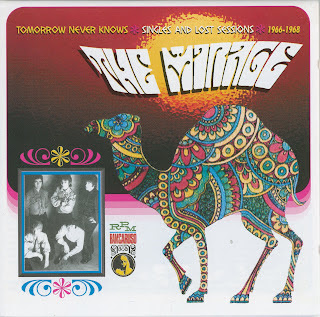 The Mirage existed right smack in the middle of the British pop-psych explosion. Plodding along with a series of pretty good singles, the group never released a proper album, although this disc does a great job of collecting most of their recorded material. Sound-wise, these guys seem to perfect fit the bill of a 'typical' pop-psych band. They rock pretty well when then need to, keep away from the more embarrassing, cloying side of period psychedelia, but rarely stand out. This music slides right down the middle path.

The disc is named after their cover of the Beatles "Tomorrow Never Knows." It's a straightforward garage rocking version and would be pretty spectacular if we didn't have the Beatles far superior version to compare it to. Really, most of the compositions here resemble 1965 beat songs with some crunchy guitars and echoing production thrown in. Tracks like "Gone to Your Hear" and "I Want Love" fare pretty well with this method. "Hold On" rips off the "Taxman" bassline for the 6087th time to somewhat mediocre effect. "One More Time" has a truly bizzare mix with an volume-controlled guitar place far above everything else. You will need to give some special attention to the band's signature single, "The Wedding Of Ramona Blair."

Later tracks like "Lonely Highway" and "Hello Enid" add it some Sgt. Pepper orchestration in a reasonably tasteful way. I guess the caveat with the Mirage is that they are always competent but never really surprise the listener. It's definitely something that the psych-pop connoisseur will want to hear, but not the disc you'd want to turn to when trying to convert someone into a fan of 60's psychedelia.

Let me throw in a note about sound quality. Everything here is very listenable, and well-produced, but most of the song do sport a frustrating coating of sonic crust. I don't know if this is due to the engineering at the original sessions or a factor of age, but you'll have to slightly adjust your ears for this one.

any chance for an update link? Thanks.