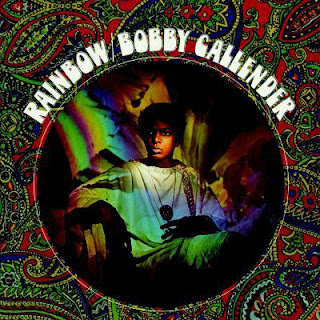 Now here's a strange one. Bobby Callender was a poet and lyricist who found himself under the wing of Alan Lorber. Armed with a top-flight, although strangely mixed, group of session musicians the fellows cooked up an odd stew of jazz, orchestral pop, R&B, and folk all properly psychedelicized for the discerning ears of 1969 (or 68; I'm really not sure) The results are actually very good. It's not quite the creme de la creme, but I'm willing to say that this one ranks as a lost classic.

The Allmusic Guide compares Bobby Callender with Scott Walker. There's certainly an analogy to make regarding the cadence and meaning of the lyrics, and the way the musicians accompany each singer are certainly similar. Given that, Callender's arrangements are typically more "out there" than Walker's 60's productions (we'll leave 2006's The Weight out of this). There is alot of dramatic, almost showtune-like arrangements as on Walker's contemporary albums. Don't look for the vocal chops here though. Callender's voice has a nice crooning sound, but it's pretty limited and comes nowhere near Walker's phenomenal range.

Most of these tracks probably rank as psychedelic tone poems or story songs. Along with some baroque orchestral arrangements, the drone of a sitar, and a touch of organ, "Mother Superior" tells the story of a doomed pious woman. It would probably offend someone. The opening title tracks is the poppiest track here, with one of the few immediate melody lines present (I think it was sampled by the Edan album in the Dr. Schluss archives).

I feel that Callender is most effective on the longer form songs. "The Story Of Rahsa & d'Ahra" starts off with Callender's creepy, delayed vocals along with a droning arrangements, until we find ourselves left with only Callender's echoing voice and a flute. Finally the tune lurches into a poppy, yet reverbed and splattered sounding coda. "Raga Man" follows this track with a similar aesthetic (although I think everything is going through an echo box on this one), making almost a mini-song suite. "Purple" does a good job of maintaining it's atmospheric, floating vibe for almost 12 minutes as Callender sings his poetry in psychedelic troubadour mode.

The poetic aspect is very worth noting on this one. I tend to focus on the music first, and I have yet to really soak in all of Callender's often dense poetry. He does deliver the poetic goods, however, and focusing on that add a few more layers to this disc. It's clear that Lorber's arrangements are trying to serve the poetic meanings to some degree.

Giving the listener a bit of a twist in the arena of orchestra pop, Rainbow does a fine job with it's niche, adding Indian drones and some serious psychedelic touches. You should probably listen to this in a colorfully-lit, smoke-filled room (incense smoke, of course). It's that kind of an album.

I've only just stumbled upon your blog... and I must say.. I've been blown away... you've amassed an incredible trove of music here... well organized... well reviewed... incredible work. Thank you so very much for taking the time to gather and share all of this...

looking forward to listening to this when the download's done. thanks!

Can I just note that I really enjoy your site? I'm only occasionally moved to download something (I'm more of a folk fan than psych), but I always enjoy what I DO download, and, just as importantly, your write-ups are great--very well-written and thoughtful. That's something I always appreciate. Keep up the good work.

Hearing Bobby's "The Way" would be so nice too... would you mind upping that one? Rainbow is terrific.

Thanks in advance,
Lex

Unfortunately I don't have "The Way." Any help bloggerland?

Still thar? "The Way" has been posted at Mutant Sounds and I'll get it up here as soon as I've fully grokked it.

Yep, I noticed it there too! Am listening to it now. Thanks. Not a bad album, I think.

Lots of humour in it too
Lex

Did you ever get in to The Way? In my opinion it is his best album (of only three...) with a really nice psych- heavily influenced indian groove that I have not found in any artist.
This album is however also really good.

megaupload DL link is dead (http://www.megaupload.com/?d=4ZZ5640I)
is there an other one ? Rainbow is deleted everywhere on the web.

Just stumbled across your blog just recently while some of these posts is there as far back as 07, I actually own the album I've had it for at least 35 years and probably haven't listened to it for as long I'm now listening to it and realize what I've been missing thanks for the excellent notes.