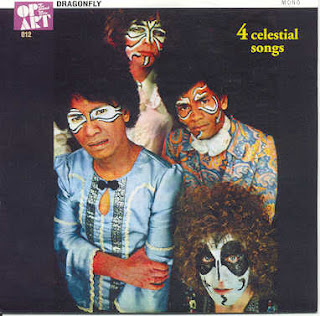 As you can see from the cover art, Dragonfly was the first home of Peter Criss, drummer from Kiss. Wait, no. Scratch that. Here we have a talented group of Dutch guys who called themselves Dragonfly who managed a 1968 released but never got to record more than an EP. It's too bad because this is a damn fine EP with great psychedelic hooks and a touch of experimentation that shows some real promise.

"Celestial Dreams" actually packs several innovations into its four minutes. Along with a fine, almost psych-folk vocal we get an awesome jazzy rhythm section, a touch of Hendrix-type lead guitars, and some odd noises which sound halfway between the three-way of analog synths, strings, and horns swooping through the background. Then with the similarly titled "Celestial Empire," the band lunges into full-tilt fuzzed out garage psych. That's a lot of genres for one side of an EP.

The second side includes a few lighter rockers that show no drop in quality with "Desert Of Almond" and "Prince Of Amboyna." Maybe these guys were going for concept albums in miniature. These last couple tracks make me think of early Caravan a little bit as they are also psych pop with a touch of jazz rhythms thrown it. Distinctively different is once again the guitarist, who is one of the best Hendrix imitators that I've come across. It almost makes me think that the man himself may have dropped in on these sessions. Almost.

You'll thirst for more after you give this a listen, but we've got to get what we can. These guys are ripe for one of those compilations that dredge up long forgotten studio demos and/or live tracks if such a thing exists.

do you want to link my blog? I will do the same in return. http://dcshare.myblog.de/

you can use my links if you want!

Dragonfly are:
John Caljouw Vocals
Rudy de Qeljou Leadgitar
Tony de Queljou Bass
Huib Power Drums
The band was a great live band.
I.ve seen them many time live, great vocals, great gitarplaying by Rudy
After 3or4 years it was over
John is still singing ,i hope
Rudy is a great gitarplayer o.a Brainbox,Massada
Tony died a long time ago,he was a nice guy
After Dragonfly i never heard anything from Huib
Greatings from the Netherlands

Hi, I'm a bit confused here, what about the 68' record self-titled "Dragonfly"

I found this on "thepiratebay". They sound like you describe but disticntly american.

Where does this stand?

There completely different, both good bands, but the US band is much heavier and guitar driven

Same name, same year!! I guess they were on the same trip?

Here's the link to US dragonfly if anyone's interested, very good band: (mininova not
thepiratebay)

One of my favourites from Holland...and beyond!
There is an ultra-cool clip on youtube: Do check it out!
Shame there isn't more stuff around by THIS Dragonfly!
ps
the US band LP is a great one too!

and, of course, Celestial Dreams: