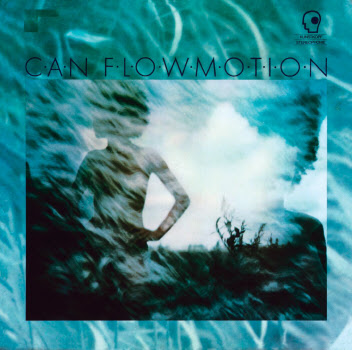 Can made a very unfortunate slide into crappiness during the latter half of the 1970's. I picked up Flow Motion as it is supposed to be the best album from that period, but it's still not that great. I suppose I'd like it more if it came from some completely obscure krautrock group, but it's from the Can, dammit, and it should be better!

Anyway, for Holger Czukay's last voyage with the band as a full time bassist, Can decides to play around with dance and island rhythms. Honestly, if I want to hear some island rhythms, I'm probably not going to grab an album made by a bunch of Germans - just as I don't want to hear opera singers rap. Compared with the metronomic blast of Can's classic work, there's not much here to impress. I know bands need to move on and try new things, but they should hopefully do it successfully, as Can did on albums like Future Days. Here we're just taking a step down.

Anyway let's get to the good news. On opening track "I Want More," the band does a pretty good job of making an avant-pop single. It just doesn't sound much like Can. They pull a similar feat on side one closer "Babylonian Pearl." They should've handed these tracks over to David Bowie, who probably could have made them a perfect fit. In between we find the band playing around with island and even disco rhythms to various degrees of success. "Cascade Waltz"
has some fun sonic bursts courtesy of Irmin Schmidt and I do like the tribal disco of "...And More."

As I suppose was a Can tradition, they get more experimental on the next side. We get an ethnological forgery on the album with the completely tribal "Smoke." Finally, Can's edge makes an appearance and for me this is the best cut on the album. Then Can attempts an epic track with the closing title song. Unfortunately, they ride along a simple galloping groove for a full ten minutes and it's just not that interesting; I get bored after about two minutes of this. It's like something that would have been a short interlude on a better track like "Halleluwah."

So, there you have it. This is nowhere near Can's prime, but it includes one stellar Can track in the form of "Smoke," along with dabblings in avant-pop, island sounds, and disco. For me the disco works pretty well, the avant-pop is ok, and the island stuff tends to fall on it's face. I wouldn't venture here unless you've already heard Tago Mago 362 times.

Can's Landed (1975) is a better album than Flow Motion and far more experimental and psychedelic. This is really their last solid lp and feature's one of their greatest songs Vernal Equinox. The song Unfinished could have come from side three of Tago Mago as it's just as strange and unsettling. Check it out if you like experimental Can.

I'm keeping an eye out for Landed, I just haven't found the reissue yet. Maybe I'll get to reviewing that and Saw Delight sometime (I can't stomach the last two albums).

Uncanny that you mention not wanting to hear opera singers rapping-- do you know the Dave soldier piece "The Most Unwanted Music"? In fact it contains just that. The song, as you can read about in the liner notes, was written using careful statistical studies of what combinations people did not want to hear in music. It is bizarre and painful, but not nearly as bad as "The Most Wanted Music", also here:

I have to say that I couldn't listen to more than 30 seconds of "the most wanted song", yet found little to run away from in the "most unwanted song".

In fact, reading that "less than 200 people" would actually like that piece I can't help but feel that his study failed to account for Frank Zappa fans...

thank you for sharing. i thought going in this direction made perfect sense for can. trying out these kind of rhythms. and i like it. i can see why others do not, though.

Listened to the least wanted and most wanted music... Liked the "least wanted" a lot because it made me laugh until they started singing Christmas music. That was a low blow.

Strange your view of 'Flow Motion' (the song_ as it's one of my all-time favourites (as a lifelong Can fan) perhaps because I was even more a fan of Karoli than the band itself. Karoli's guitar is quite superb on 'FM' in my opinion and the other tracks pale into insignificance in comparison. As an album as a whole, it isn't a patch on the earlier albums but nor does it plumb the depths like the later ones with the new band members who should never have been invited to join.....