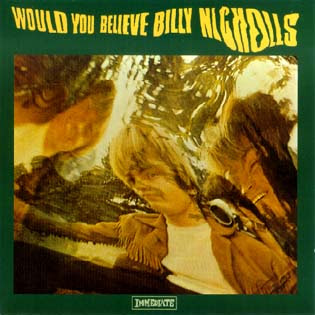 Billy Nicholls had everything going for him for a while. He dropped out of high school in 1967 and headed to seek his musical fortune in swinging London. Somehow he managed to impress George Harrison enough to get a referral to the fledgling Immediate Records, where he got to record an album almost completely self penned, complete with backing from an orchestra and the Small Faces. Unfortunately, the bottom then fell out for poor Billy. Immediate Records sank like a stone, and except for a couple of promo copies, this one didn't see the light of day until the late 1990's.

As with many withheld albums, the reputation of this is a bit inflated. The rep is that this is another Pet Sounds, which sets the bar just a little too high. This isn't too far under though, comparing favorably with the Small Faces own albums and proving itself maybe the best example of British sunshine pop.

Once again, it's not quite Brian Wilson level, but the vocal arrangements on Would You Believe are exceptional. Billy has a soaring, smooth voice and his backing arrangements are nothing to sneeze at. They do manage to eclipse what the Who or the Beatles were doing vocally at the time.

Of course, the other carrot hanging in front of your face here is the presence of the Small Faces. They do a fine job, although the show restraint as not to steal Billy's thunder. I'd say their moment of glory on this album is on "Girl From New York," with Steve Marriott providing at face-melting fuzzed out lead guitar, and drummer Jerry Shirley pounding the hell out of his skins. Another session notable in the guise of Nicky Hopkins shows up on the disc, playing some fine harpsichord parts.

Still, young Billy is clearly the star of this album, with the previously mentioned angelic vocals and some wise beyond his 19 years songwriting. The songs here are very much fully formed and top tier. Immediate seemed strangely wary anyway and saddled him with the outside written title track which leads the album. Although a little poppier and less soaring than Billy's own compositions, it is fortunately also a great track and ends up an asset.

Billy certainly had some fine potential single material of his own. Everything here is damn catchy, but "Daytime Girl" sounds like it should have been a top of the pops classic record. Oh well. I'm also partial to the climbing vocal of "Life Is Short." It's no mystery where Brian Wilson comparisons come in as he was one of the only other fellows writing stuff like this.
There's also the topical hipster reference with "London Social Degree," which is one of those songs you have to pick the initials out of. It too has a great melody and would have been fine without the goofy hipster touch.

Would You Believe is an album with a tinge of regret. This is only Billy's debut and had this gotten a proper release, it could have stood toe-to-toe with the Kinks' Village Green or the participating Small Faces' Ogden's Nut. Billy could've been a contender so to speak as his career progressed. As it was, Billy became more of a behind-the-scenes figure, working with a number of big names like the Who and Phil Collins behind the boards.

The most recent reissue includes some demos and outtakes on a second disc entitled Snapshot. I'm too lazy to review it, but seeing as this admittedly fully formed album is his only proper release that I know of, you'll want to hear it for a bit more of Billy.

Thanks for making this available - I've been looking forward to hearing it.

Would love to see the link here again!! Pulllllleaaaase?

I really need this music this summer. Please be kind and give us the link again.

Any chance of a re-up? Please and thanks!