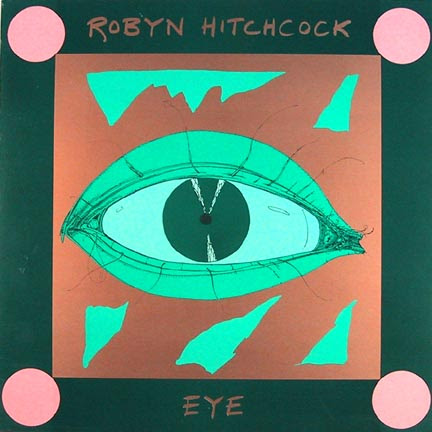 Eye is a Robyn Hitchcock effort without the Egyptians, or any other backing band for that matter. The only sounds on the album are Hitchcock's voice, acoustic guitar, rather stately sounding piano, and a very occasional percussive thump. I have to admit that I'm usually a sucker for strange processed sounds and warped production. We have none of that here, but the spare sound does play to Hitchcock's strengths and probably stands next to the similarly arranged I Often Dream Of Trains as Hitchcock's best album.

Hitchcock is one of the best modern lyricists around, and certainly one of the trippiest. His voice, while not technically great, is full of character and also one of his best assets. Every lyric on Eye is delievered crystal clear backed with almost endless layers of meaning. Certaintly "Napoleon wore a black hat, ate lots of chicken, and conquered half Europe" has to be one of the best opening lines on any album ever. "Queen Elvis's" opening line "People get what they deserve/Time is round and space is curved" would have been a contender also had it been track one. Both the opener "Cynthia Mask" and "Queen Elvis" are early highlights of this disc.

Every track here has something great to offer. Depending on the listener, you might prefer the wacked out vibe of tracks like "Certaintly Clicklot" or "Clean Steve." If you're like me, you might like the spacey acoustic vibe of stuff like the tracks I quoted in the last paragraph, "Glass Hotel," or "Aquarium" (which actually does feature an electric guitar). I feel it's hard for anyone to deny the devastating lyrical and vocal impact of "Linctus House," or "Agony Of Pleasure." There's a nice instrumental halfway through with "Collage Of Ice."

While Eye is a spare album, it sports great production. His voice is in top form and supported by a crisp sound with just the right amount of echo, and sometimes a few harmony Robyns joining in. The guitars and pianos are balanced just right on every tracks. Compared to a Sgt. Pepper, many folks think it must be easy to produce an acoustic album, but the spare balance is often difficult to achieve, yet Eye hits it on the mark. This sound fits Hitchcock like a glove, and I was not at all disappointed when I attended a Hitchcock show four years ago and found it to be completely solo (usually I want to hear a band at a rock club). Eye's quality is a testament to this.

The bonus tracks here are once again demos, and have a few amusing, if minor, changes. I think they serve to show just how well the proper album is produced.

Hello there:My Glass Fish Eye CD has 18 traks...how many are on dem Rhino CD? (Bonus)...can i request the bonus stuff as well?...Greetings and thanks.

Thank you for the Hitchcock stuff, and complements on your fine blog.