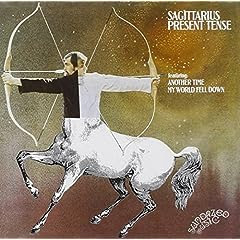 Sagittarius was the brainchild of producer Gary Usher. Although having worked with legends such as Brian Wilson and the Byrds, Usher felt that he wanted to record under his own steam. Pressures from the record company wouldn't allow him the time or money to persue this on his own, hence Usher created the faux-band Sagittarius.

The project in it's initial form resulted in the classic "My World Fell Down"/"Hotel Indiscreet" single. The A-side is a masterpiece and one of the absolute best psychedelic singles of the 60's. Featuring Glen Campbell and Bruce Johnston on vocals (both of whom had subbed for Brian Wilson in the touring version of the Beach Boys), plus various members of the LA session pros known as the Wrecking Crew, we basically get the best Beach Boys tracks that none of the band members actually had a hand in. It has a very SMiLe like cut-and-paste sound, with the added avant-garde bonus of a found sound midsection. The B-side of the single sounds like the theme song for some strange sex sitcom with a short interlude from a screaming hippie-fascist courtesy of the Firesign Theatre.

After the initial single, the history of Present Tense becomes a bit more convoluted. Faced with the prospect of creating an entire album, Usher brought in Curt Boettcher, who had worked with The Association, The Ballroom, Eternity's Children, and later, The Millennium. With Boettcher's presence, the final album has a very different feel from the single.

Present Tense is certaintly a sugary-sweet album, perhaps the sunniest of sunshine pop. While "My World Fell Down" has a strong tinge of melancholy, the later tracks don't. Boettcher's voice, prominent on the finished album, is also quite different.

As long as the listener doesn't expect more creations like "My World Fell Down" and can stand a little syrup, Present Tense is a very worthwhile album. "Another Time," "The Keeper Of The Games," "Would You Like To Go," and "The Truth Is Not Real" are all immaculately writted sunshine pop songs with spectacular vocal arrangement. Even questionably titled songs such as "Song To The Magic Frog" make for pleasant listening.

I imagine scheduling was a problem and a few tracks from Boettcher's previous project The Ballroom are ported over to Present Tense. Unfortunately, one of those tracks is "Musty Dusty," which was embarassing on the Ballroom's album and remains so here. Usher's presense is best felt on the awesome and etherial "The Truth Is Not Real." "My World Fell Down" and "Hotel Indiscreet" are present here in inferior versions with the avant garde sections excised. That said, the modified versions do fit the flow of the album better, and the original single is present in the bonus section.

The bonus tracks are quite strong many of them could have been a strong asset to the album proper- certaintly they coud have replaced "Musty Dusty." Usher has another opportunity to shine on the harmony laden "Mass #586" while "Get The Message" could have been a great single in 1967.

Present Tense is one of the stronger sunshine pop albums, with a production touch somewhere between SMiLe and The Notorious Byrd Brothers. It's a perfect wall to follow up The Millennium's Begin, although I would probably recommend that 1968 project first.

Hi Dr.Schluss i would love to download this album if you have it?