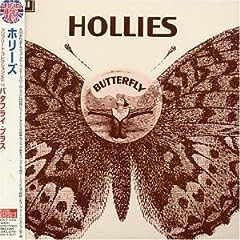 Although the Hollies were one of Britain's biggest pop bands in the 60's, they would remain relatively obscure in the States until the 70's, by which time Graham Nash had left the band and the remaining members had converted to a rather schmaltzy soft rock band. Butterfly is a prime piece of British psyche pop which has never really been noticed in the US. In fact, I'm not sure if it has had a proper American release to this date. I'll be reviewing the 2004 Japanese reissue which includes the mono and stereo British release plus the "King Midas In Reverse"/"Everything Is Sunshine" single.

One of the unfortunate conceits of British psych is that band's ideas and intentions often surpassed their recording capacity. Butterfly escapes this fate as the Hollies had recent hits such as "Carrie Ann" and "On A Carousel" and benefitted from a A-list recording budget. Thus, Butterfly features plenty of exotic instrumentation and full, live orchestration. Much of their experimentation on the album reflected other prominent releases of the past year (Sgt. Peppers, The Byrds' Younger Than Yesterday, etc.) but these ideas had not yet passed their freshness date and the phenomenal songwriting of Clarke-Hicks-Nash more than compensated for any redundancies.

Apparently, the band as a whole was not too excited about the dive into psychedelia that they had begun with Evolution and continued here. But it was the prevailing style of 1967 and Graham Nash was gung-ho about taking that direction. This caused creative strain and Graham Nash would depart for America shortly after this album, but on Butterfly the tension provides a perfect balance between pop and psychedelia.

Butterfly starts with "Dear Eloise," a lurching number that provides sort of a manifesto for the rest of the album with it's tripped out mellotron passage shifting into a full blast pop-rock section rivaling even some of the better Lennon/McCartney singles. Nash would also specifically reference The Beatles on the sitar-laden "Maker," which is not as complex as George Harrison's sitar excursions, but has more of an immediate pop edge.

The band scores a couple of should-have-been singles with the soaring "Would You Believe," which is my personal favorite on the album, and the poppy "Step Inside," which recalls prime 1965 Brit-invasion pop. On the other side of the spectrum, the band tries to search for the astral sounds of the day on the one-two punch of "Try It" and "Elevated Observations?" In full disclosure, their "experimentation" here is rather tepid when compared with Syd Barrett's Pink Floyd, The Soft Machine, or a host of the edgier psych bands, but their pop instincts save the day and make the songs enjoyable, if a bit dated. The one major misstep is the silly lyrics and goofy orchestration on "Pegasus." This song has missed most US Hollies compilations, and it's not really worth searching out if you don't already have it. The closing title track is a much better bit of orchestration, and sound of a piece with contemporary Moody Blues efforts.

"King Midas In Reverse," which may be The Hollies' best psychedelic number, includes amazing vocal harmonies and what starts as deceptively simple production morphing into a huge orchestral wall of sound. "Everything Is Sunshine" is an enjoyable but run-of-the-mill B-side.

My release includes the mono and stereo versions of all of the tracks. As is common with British 60's pop, the mono mix was intended as the definitive mix while the stereo was almost an afterthought. This is especially true here as the mono mixes are finely textured and provides a punch in all the right places. Unfortunately the stereo mix suffers from pointless separation anda poor balance that weakens the sound and immediacy of many songs. I only listen to the stereo version as an occasional curiosity and in fact rate it a full point lower than the mono.

Butterfly is a somewhat neglected release that I believe is one of the definitive psychedelic pop albums. You may recognize "Dear Eloise" and "King Midas In Reverse" from airplay (or not, they don't get played that often) but there are plenty of other tracks here to match the majesty of those songs.

I think you right...the mono mixes do have that extra 'something' the stereo mixes lack. However,I also like the RE-mixes done for most of the tracks found on the 3-disc EMI box set a few years ago. Have you heard it? Anyone else out there have a thought about that too?

Thanks for making this available. I bought one of the Greatest Hits collections, but I like to have the music in the original form.

Thank you so much for these Japanese Hollies discs!!!!

thanks for the mono version - still avail.

Thanks so much, Dr. Schluss. I love this blog--the song "Maker" on this album is amazing.