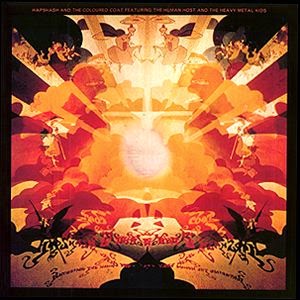 Man, I had a ceremony with this one.  Listen to this and you're down for a primordial psychedelic pummeling.  Yeah, this is the music that the CIA created.  The sound's going straight for the hidden punk rock face of the Velvet Underground follow-up act in the Factory.  They don't necessarily have the talent, but they've got the Owsley to do their thing.  Word on the street is that the group were some English visual artists throwing down the drafting gear, picking up guitars and bongos, and doing their thing.  There's barely songs here, but the tribal gathering is clear and the vibrations are just at the right frequency.

We'll focus straight on the main event.  "Empire of the Sun" is an epic, fifteen minute awakening - drums pounding away with a churning rhythm guitar, punctuated by bells and strange spoken incantations.  The opening "H-O-P-P-Why?" opens the proceedings in a similar vein, but there's plenty of weirdness in between.  "A Mind Blown is a Mind Shown" rides folkier waves and "Aoum" goes spiritual, acapella Ligeti, but the pure freak out comes in "The New Messiah Coming 1985."  It's a warped audiograph of the dosed coffee house of the times - unplugged but electrifying to the ear.

Are songs always the answer?  Hapsash and the Coloured Coat don't seem particularly convinced.  The tunes here are a far cry from psychedelic pop, but they take the raw elements of what was hip and splatter it against the wall Pollock-style.  At least they have the etiquette to warn you with the album cover depicting your mind getting blown.
Posted by Dr. Schluss at 2:26 AM

Labels: Hapsash and the Coloured Coat

Thanks for all your efforts to illuminate obscure psych over the years,Doc. And as well fo rthis post; excited to give this one a listen!

This was famous poster artists. And the musicians was not so bad either, in fact 'the heavy metal kids' was most of Art (which later morphed into Spooky Tooth)

Thanks! Can't wait to listen to this one.

Thanks for posting, I can't wait to get home and listen to it!

historical importance: this record is one of the first in which the rock (and not jazz) musicians play absolutely free.
it can be compared to le stelle di mario schifano (1967 too, and in both the projects graphic rules..). but dedicato a.. is a great experimental job; instead of hapsash or the heavy metal etc that in effect musically represents no more than the chaos of a bunch of freak teenagers, playing bongos while smoking joints and blessing shiva..
if you are old enough to have been at a rave party before of the mdma and the techno-music (they were called rainbow), you know what i am talking about..
amon dull will continue the party but with a very bigger talent.