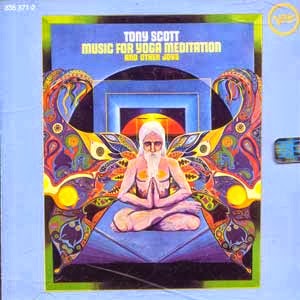 This album is a fascinating and enjoyable early example of the world's music seeping through Stateside. Tony Scott was a few steps ahead of the game.  This is more Indian than jazz, but Scott's fine flute playing brings just a touch of a midnight, rain-
swept Chicago alley to the proceedings and managed an album that is quite wonderful.
Posted by Dr. Schluss at 11:20 AM

great work by this author. music is one of the great method for getting peace of mind

Thanks alot! This is great stuff! Love it!

quite enjoyed this. Thanks.

Hi, i have you at my bloglist and would be glad if you an add my blog: http://dariuschrisgoes.blogspot.se/ //ChrisGoesRock

Thanks very much for this. Haven't heard it yet but I agree that tabla is always a plus.

Excellent choice. Have used this in yoga class. Fans, also check out Scott's "Music for ZEN Meditation", another gem without synthesizers.

Dude, you are killing me. Awesome album, awesome website, but Tony is playing clarinet not flute.

Ya got me! I play many instruments, but none of the ones you blow into. Twenty years ago I dated a girl who played the bassoon and had a best friend who made oboes, but I'd be hard pressed to tell the two apart. I did finally learn to distinguish Miles Davis from his saxophone players, though. I don't want to admit how long that took.