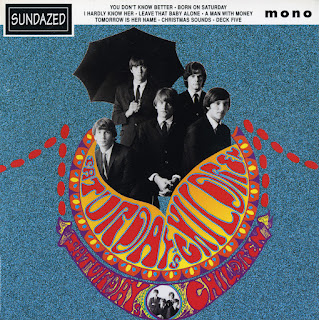 Here at the psychedelic garage, we tend to focus on LP's, but as you students of Nuggets are aware, there are plenty of homies that never quite got a whole album in the can.  Beatles obsessives, Saturday's Children, managed at least half of an album's worth of material for your musical archaeology.  This Chicago band indeed set their aim directly for the heart of Beatles '65 just like their fellow Americans in the Knickerbockers and Barry and the Remains.  They did hit the bull's eye quite as intensely as those bands, but they definitely propelled their aural arrow into the blue area of the target.  Or maybe the ripped-from-ragged-vinyl sound quality of these recordings brings them down a notch.  Don't mind me too much, these eight songs are perfectly listenable.

As would make sense, "You Don't Know Better" and "A Man With Money," which lead off their respective E.P.s, are the pop torpedoes.  It pretty much sounds like the Beatles, but if Murray Wilson was their father telling them to smile more, or if Bob Dylan had gotten the mop tops into cotton candy instead of marijuana.  Honestly, "A Man With Money" loses a few points with me since the lyrics refer to the singer as a 'poor boy.'  I really dig "Tomorrow is Her Name," which seems like it's going to rip the Beatles' "Rain," but ends up sounding like a Beau Brummels tune instead.  The real flaw is that the B-sides dip into the realm of novelty filler, which isn't really a good idea on a four-song E.P.  "Christmas Sounds" is kind of groovy, but it's still a mildly schlocky X-Mas tune and is followed "Deck Five," another holiday tune that qualifies this E.P. to have Santa Claus, Jesus, or the both of them having an air hockey match on the cover.  The first E.P. enters the novelty sweepstakes with the mildly music hall "Leave That Baby Home."

I don't know, when I started listening this stuff sounded pretty groovy, but the more I listen to it, the more I want to put something else on.  Still, there are a few prime pop blasts for the ears of the retro-hipster.  I guess the guys would've shined best with those one or two A-sides lurking around on a disc of Nuggets.  I don't think they're on Nuggets - I've got the box set two feet away from me but it's under a large stack of Todd Rundgren and Philip Glass CD's and I'm too lazy to move them and check.

Link no longer works. Can you please re-upload? Thanks!!