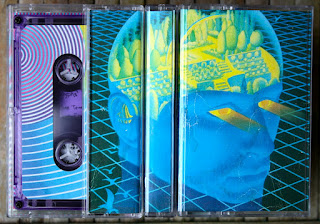 Here's another spun sliver of ambient cosmic gold from the world of hissy cassette tape experiments.  Transmuteo trades in some extremely chill sounds, for the most part, this album sends the synthesized sequences to the background and pushes forwards with environmental and found sounds.  While there is a fair amount of interesting sonic sculpturing going on here, the main effect is best experienced as a sonic jaccuzi.  I bet the Dude could've thrown this one in his bathroom cassette deck once the songs of the whales had ended.

Although a few intentional tape glitches humanize the mix a bit, most of this just glides through like mental butter.  "Zone Temple" introduces us to a slow, synthetic sequence that serves as musical DNA and that the album will regularly revisit.  So, we'll just cut to the chase and target "Lightworker's Meditation," which also features a variation of the main motif.  The star attraction of this one, however, is the exceptionally trippy voice sample, giving meditation instructions to, uh, lightworkers, and insisting that we fill our upper tetrahedrons with stuff like indigo light.  What is a lightworker, anyway?  Are they just replacing street lamps or dancing the dimensional dervish twirl on another plane of there?  Can I be a lightworker?  The "Boards-of-Canada-on-downers" vibe drifts along into "Starseed," the next track as well.  But the whole album drifts along nicely, really.  Sometimes we get a touch of gamelan like in "Zion Hologram."

This is one of those discs geared at those of us looking for that out-of-body experience.  There's very little here that you can really gnash your teeth into, but if you're going to be into this sort of thing, that's probably the way you want it.  Transmuteo brews a light blend that simply wafts through the starshone tropical breezes.

They've got a website for this one over nyah:
http://transmuteo.bandcamp.com/album/cymaglyphs
Posted by Dr. Schluss at 11:45 AM