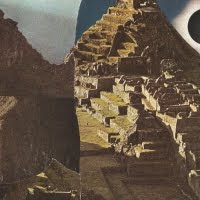 Quality: 4.25 out of 5
Trip-O-Meter: 5 out of 5
I've gone on a bit about all the strange electronic and ambient music that's been drifting around on cassette tapes over the past few years, and this is definitely one of the real winners. The truly trippy cover reflects the washes of sound that you're going to hear on this set. It's a hazy and mystical experience, with the tape hiss becoming a integral ingredient of this sound world. As a musician, I tend to pick out the instruments when I listen to tune, but I have no idea what the hell's going on in these tracks. Personally, I find this kind of disorientation invigorating.
The two tracks tend to follow a similar path of a full on drone which slowly builds in detail with small melodies slowly peaking through the haze. "Eternal Light" begins with an invocation/warning from a Mohave(?) fellow which echoes the environmental/apocalyptic vibe of the great film "Koyaanisqatsi (Life Out of Balance)." You'll hear him drift back into the track as if submerged later on. "in the Realm of the Desert Temples" build ominously, as if we're preparing for a human sacrifice before entertainingly plunging into a coda which provides release as it comes across like the tape of a new age album that's been melting in your Ford Escort since 1985.
It's been a few months since we've had a real brainwasher on the blog, but I think this'll do the trick. I've found it to be addictive listening. This kind of music requires a sort of painterly control and sweep. Mohave Triangles may very well be masters of the form.
Head to their website to download this one and perhaps a few more:
Mohave Triangles
Posted by Dr. Schluss at 11:33 AM

Have to agree with you on these guys (guy?). Mohave Triangles just may convince me to take up drugs again. Or maybe that won't even be necessary... Great blog, by the way -- have you come across any more "psychedelic jazz" a la Plummer's "Cosmic Brotherhood?" Cheers.

Thanks for the shout out on this one. Second Mr. Jorgensen's thoughts about the approach to MT. And living where I live I can get my Dr. to write me a scrip for med weed over the phone so me thinks plumbing the MT catalog will be an enjoyable investment indeed.

Hey Ive been coming here for new music for a while now and never comment on internet things but thought id say that I've found some really amazing stuff that has helped shaped my current view of music. Thanks. General psychedelic phrase.