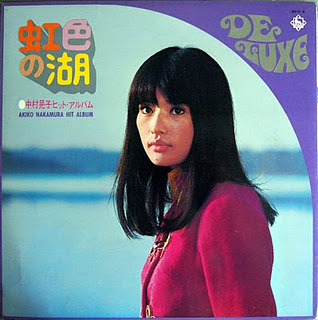 Quality: 3.5 out of 5
Trip-O-Meter: 2 (plus a ghost point for surf guitar) out of 5
As you may or may not know, I'm based in Japan and as such many sounds of the island pass by my ear. Unfortunately, J-pop is pretty rotters, although there is definitely some awesome music lurking in the underground. I do did the older sounds of Japanese pop and old school enka (enka is the traditional form of Japanese popular music), and Akiko Nakamura's album has a bit of both running through her musical DNA along with a candy-coated obsession with the contemporary sounds coming from the West. I hope you dig the groovy, if a bit square, sounds on this LP. Japan didn't really have any of the 'peace, love, and LSD' revolutions we had in the West, and it shows.
Nakamura goes for a few Western cover tunes, but that's not really the place to start. The arrangements are pretty schmaltzy, and I've got to admit that I hate Peter, Paul, and Mary's "I Dig Rock n' Roll Music" with a passion - regardless of who's playing it. No, you're here for the day-glo, go-go dancing pop tune, and you'll get that in spades. "Niijiro no Mizumi (Rainbow Lake)" gets us started with an almost funky drumbeat almost drowning in an amusingly enka-like string arrangement and punctuated with a surf guitar lead (the Japanese LOOOOVED the Ventures in the 60's). "La, La, La" throws us another great surf guitar bone, and would've felt right at home in the Bond flick "You Only Live Twice." "Betsuri (Wakare) (Separation)" goes full-enka, which basically mean a depressing melody with even more depressing lyrics played melodramatically. Of course you haven't really heard enka until you've heard a drunken, middle-aged, crying salaryman belting it out at karaoke, but this will do for now. "Tokyo Flower" will pick you up again anyway with a jaunty horn arrangement. But y'know, by this part of the album they've completely stopped trying to be groovy for the kids anyway. They try to trick you by sticking the Peter, Paul, and Mary cover at the end, but that's kind of like trying to make up to your girlfriend by pooping on her doorstep.
So, this isn't really psychedelic, but it may be mind expanding, especially if you haven't spent time in Japan. Anyway, it goes well with senbei (Japanese rice crackers) and Asahi beer. Does anyone know a good blog for 60's and 70's Japanese pop? All I can find at the record store is damn AKB48.
Posted by Dr. Schluss at 10:46 AM

Thanks man. Really enjoying this one. Always been a fan of 60's Japanese pop. But there's a lot to sift through and it's fairly hit or miss. Would love to hear more of the better stuff you've found.

Didn't know you are in Japan. Me too. I am enjoying your posts. Japan music scene is out there. A breed unto itself in a lot of ways. Take it easy.

Didn't know you are in Japan. Me too. I am enjoying your posts. Japan music scene is out there. A breed unto itself in a lot of ways. Take it easy.

Didn't know you are in Japan. Me too. I am enjoying your posts. Japan music scene is out there. A breed unto itself in a lot of ways. Take it easy. John

Actually I couldn't disagree with Rah more ... the Japan music scene is for the most part not out there. At least not in the mainstream 60's and 70's when the big labels were in control ... it might be a bit more out there now, if you're interested in it ... all that stuff is there online now ... the stuff we need to preserve is being thrown into skips every day ... vinyl is getting harder to find in recycle shops every day ... having said all of that, thank you for this ... there's some pretty perky stuff on here ... i think you scored ok ... pinky and killers have a couple of outstanding tracks but the dross is there too ...

The music scene in Japan right now is so dead - Shiina Ringo/Tokyo Jihen is the only artist that matters.
But there were some interesting acts back in 60's, even more pop side.
Like this post, Akiko Nakamura - she is pretty much forgotten figure now.
Thank you for this.

Hey Dr.Schluss, I'm relatively new to your blog but am enjoining your taste of music so far indeed and I thought I might just drop a comment on this one to say hi and thank you because I'm Japanese and it's a Japanese stuff offered here,so why shouldn't I.

I didn't know about this Akiko Nakamura nor even heard before but from your article it sounds pretty decent. Sadly current J-pop and J-rock scene sucks arse so badly just like you mentioned but some of the older stuff are alright, I can find many samples for my beats in Enka and old J-pop as much as I find 'em in jazz, funk, soul, psychedelic rock and shit,too.

Anyways, about that good blog for Japanese pop in 60's or 70's, I've done some research typed in Japanese just now and found out that there are actually many of them. But the thing is they don't let you download and even worse they're just the reviews...many of them are even without listening preview, so it's pretty useless especially when you're foreigners but this one,

Thankfully it's got youtube function with it, so you can just click and go. Their Library isn't a huge one but they cover some minor tunes that I didn't know about(I grew up in 90's in Japan) and it's all good old J-pop stuff from the showa-era.

Hope this one helps.

There are 2 excellent compilations of 60's japanese sound on the very very excellent label Big Beat :