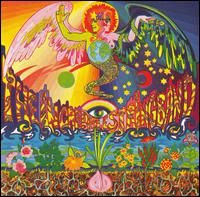 Likewise, had these two elpees long, long ago but rarely played them. They just seemed to be pre-requisite to any self-respecting psych collection but a bit too way out & folky for my former pace-driven DJ daze! Listening to them now however, is like a breath of fresh air. Loads going on & some pretty little tunes by anyone's standard. Not sure they top Syd though but a nice counterpoint & yet another reminder of just how incredible, an evolutionary leap, music culture was taking a mere ....44 years ago!! WAH!

The Syd comparison is simply in respect to the whimsical side of the lyrics. Overall, I'd have to choose Barrett's music if only one could survive the musical rapture of 2017.

Bowie & Bolan both ISB fanboys; these alvins a big part of my teens-oily 20s

We have a new address.
It's our own domain, so hopefully, this is the last time we'll ask you to update your blogroll. You're posted over at our place, of course.

Never Get Out Of The Boat is now...

I'd choose ISB any day of the week over Syd. All my respect to Syd and I do enjoy his part in Pink Floyd and his solo albums but you can never compare that to the amazing music of the ISB. That is just my opnion.
I wish I was there in the 60's..... the height of creativity.

this is, for me, the better album of acid psicodelic folk please change quality for 5.0