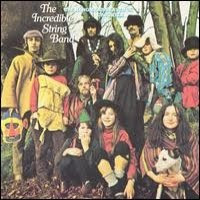 If you have any need for some acid folk in your life, this very well be the best place to go. This is the ISB at their best as an acoustic unit. After this, they'd start mucking around with a few electric instruments, and eventually end up as more folk-rock sort of band. They never really did the electric thing as well as Dylan, however, and this album stands tall as their masterpiece.
Posted by Dr. Schluss at 10:59 AM

You forgot to mention Witches Hat and Nightfall. The last one being one of my top 5 songs in the history of music. It is the feeling it transmits, amazing. Having a soft spot for sitar in my psychedelia/folk this is the one for me. Dreamy and deep lyrics at the same time with stripped but engulfing(?) music.
Another of my favorite bands that I havent seen on your site is Country Joe & The Fish, why don't run a list of their albums with comentaries, it would interest me to see what you think.
Keep up the good work, you have great taste in music!
Fredrik

listen to easter jam by country joe n fish u will just forget everythin else .....specially the lead part ..really gets u high ....another band i wud like to mention is spirit ,,,best art rock band ever ,,,its sad tat not too many people remember them,,,,listen to tauras n compare this to stairway to heaven ,,,,