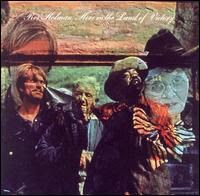 In full disclosure, this isn't quite up my particular musical alley. I'm definitely cool with the psych and Eastern touches, as well as the general British folk underpinnings, but this really is halfway down the Wonder Bread, 70's singer-songwriter hallway. If you've got a 'thang' for that sort of thing, then you'll probably have some additional appreciation for these recordings.
Posted by Dr. Schluss at 11:08 AM

Thanks. Love Kristofferson, so I'm looking forward to checking this out. Great blog, by the way.

Cool, so I'm guessing this sort of chills on the Gary Higgins-Bob Desper spectrum? If so, I'm REALLY into it.

This is great--out of control vibrato and all. Some really wonderful medieval-wizard-dragon crap going on here, as well. Thanks!

Cool! I really like it! Some further research also reveals that Rex Holman participated in some on-screen psychedelia as well, appearing in the classic (and creepy!) original Star Trek episode 'Specter of the Gun' as Morgan Earp.