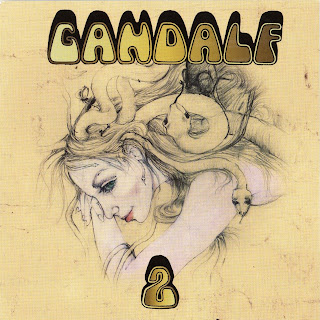 If for not other reason than the spectacularly psychedelic cover art, I'd wager that a fair amount of you psych-heads out there know Gandalf already. The thing is that the baroque popsters had already broken up by the time that first album came around in 1968, and these recordings are mostly from 1968-1970. No, this is more of unearthed odds and sods from Gandalf luminary Peter Sando - but this is not a problem at all. Sando wrote the two original songs on the first Gandalf album, and I lamented in my review that there should have been more. I was very happy to find that we get eight more Sando tunes on this disc. Now, fans should come forewarned that the organ sounds and endlessly echoed vocals that formed the band sound is not often present here. In fact, these songs are pretty much all over the place stylistically, with acid-folk, psych rock, and pop rock along the lines of the better early 70's Beach Boys recordings representing a few of the genres bouncing around the grooves of this album. The recording quality varies a lot as well from full production numbers to sputtering demos.

We get the best tunes at the beginning and the end of the album. "Bird in the Hand" is a great opener and could have slipped in nicely on the Beach Boys' Sunflower. "Days Are Only Here and Gone" and the cover of "Ladyfingers" do drift a little closer to the more recognizable Gandalf, so you don't get left completely high and dry with this collection. The tail end of the album has some live tracks that are not of the best recording quality, but they do rock out. "Golden Earrings" is arguably better than the studio version and they make a nice Yardbirds' style rip through "Downbound Train."

I don't think this really qualifies as a real Gandalf album, but there are lots of groovy sounds for you to pick and choose from. Besides, when dealing with a good band that only released one album, there's something to be said for any attempt to scavenge for some more tracks. It certainly plays better straight through than Syd Barrett's Opel.

I had no idea Gandalf made a 2nd album...thanx!

Dear Doc,
I feel compeled to thank you profusely for sharing these sounds that shaped my young adulthood 40 years ago. Thanks for keeping this cultural legacy alive.
Trippingly yours,
George Trakker ( I don't regret a thing!!!)

Thank you for all of your posts Dr. S - been a follower for a long time now- looking back through your posts can't beleive i missed this. any chance for a reup?