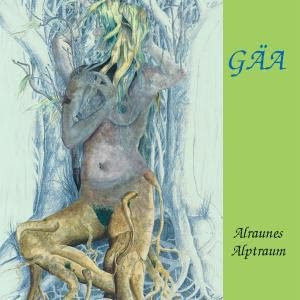 Gaa was one of the more obscure krautrock bands, which I suppose is already a somewhat obscure genre. The first three tracks were earmarked for their never completed second album, while the rest comes from their "second wind" in the 80's. They don't sound like the same band at all. 70's Gaa has a smooth psychedelic jazzy sound while the 80's stuff is more like manna for leather-clad eurotrash neon-lit club dwellers of the period.

You'll want to give this a listen for "Autobahn" and "Morgendammerung." The first has nothing at all to do with the Kraftwerk tune, but sounds sort of like if Roger Waters had taken his World War II obsession to the next level. I'll admit that it could just be because they're singing in German. Either way, it's got a pretty awesome spacey groove. "Morgendammerung" is a lengthy jazz-rock instrumental that has a great flow, even if the bass player seems to have trouble holding the beat a few times. "Heilende Sonne" is a perfectly listenable track, but the rest of the album is ridiculous. I don't necessarily want to dismiss the rest of the album as the inspiration for David Hasselhoff's musical career, but I can help but get an imagine of the Hoff himself working his way through a no-budget karaoke video as this stuff plays. I bet seeing the 80's Gaa in concert would have been a memorable experience, but it sound silly on your sound system.

So we have the memory of a pretty decent 70's krautrock band side-by-side with a bit of the absurd. At least the last four tracks are jaw droppingly bad in a 'I can't believe this is happening' sort of way. That's got to make it worth one listen during which you can pump your spikey bracelet-lade fist. It also a fine album for you to subtly end your next party.

Note: Yes, I know that the first "a" in "Gaa" has an umlaut, but I'm too lazy to figure out how to type that out.

Note 2: While I do enjoy the bug green on the cover, the rest of the art work makes me extremely unhappy and I think gave me a nightmare last night. Fortunately, the other dream where I went skydiving is the one that I remembered well.
Posted by Dr. Schluss at 10:35 AM

Just Type GAEA instead of GÄA.
Thanks for the warning i won´t listen to this album.
Ragnar