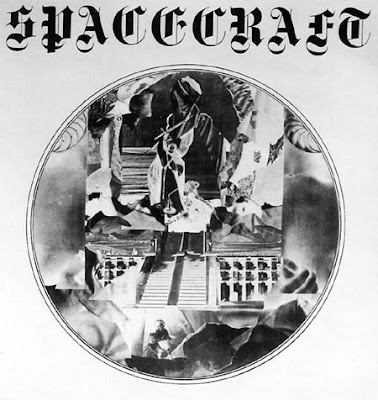 I've spent the past few months brainwashing myself with this album on a pretty regular basis. This guitar/synth duo hails from France, but I'd say they're pretty well in cahoots with your krautrock superstars. There's plenty of early Tangerine Dream synthetic iciness and Manuel Gottsching-style guitar insanity lurking in these tracks. They also seem enamoured with the drum machines of the era, which is pretty fun in a retro future way.

This album really slides on through as a single entity of trippiness, but if you break it down, there are basically two kinds of tracks. "Lumiere de Lune" and "Ananda" are distinguished by huge stoic walls of ambient analog synth; I'd say the quietr parts of Tangerine Dream's probably serve as a good reference point. "Pays de Glace," which I understand is a modern day bonus track recorded a few years after the rest of the album, is somehow both more ambient and threatening. Think of Tangerine Dream's Zeit sped up an imbued with the chiming qualities of the Om album you'll find in this blog if you hunt around. The other tracks fall in the category of "Logan's Run-on-crack." Here the primitive drum machines are everpresent and the guitar breaks out of the box. Basically, this is what something like the Moog Cookbook is aiming for, although the novelty value is replaced by sonic schizophrenia.

I'd say this album deserves a fair sight more attention. It compares pretty favorably with something like an early Popol Vuh album, and definitely earned its Trip-O-Meter rating. This is a fine collection to explore the thin rings of Neptune with. It would also work well to subtly scare everyone home if you played this in Tomorrowland around closing time.
Posted by Dr. Schluss at 12:44 AM

Some very nice music here from a group I'd never heard of. Thanks for sharing this treasure

Just spinning. Spacey. Nice one, thanks!

Spacecraft is the place! I have been looking for a decent rip of this album for a while as it is just impossible to find (and no doubt vastly over-priced as these things are) so thank you very much for this.
My personal favourite is the Lumiere de Lune track, such a blissed out angelic drone that one can imagine if the voyager satellite at the point of departure from our solar system had a theme song, this track would be it.

PS> not to get all anally retentive but I thought this came out three years later in 1978, if not, I stand corrected!

Whoops, I forgot to add, if anyone is interested, check out Spacecraft founder member Ivan Coaquette's pre-Spacraft group Musica Elettronica Viva's 1970 album "Leave The City", especially if you grok those early seventies psych-oneiric tones of drone that the French and Germans seemed masters at.

I think a couple of the tracks at the end are live recordings from 1978. Honestly, I had a hell of a time trying to figure out what date to put at the top.

Yeah, it drives me wild when I cannot put a single date on the release or even worse when I see 197x,198x etc..I think how can the date not be known!?! So I really sympathise with you.

I did a little more digging on the origins of the album:

From the 1995 CD re-issue with the extra track: "Track 7 is a previously unreleased bonus track recorded live 1973"

Its enough to drive you to despair!

Well,if it was mastered in 1978 I guess I'll go with that date. I can't stand 197x either. Thanks for the research!