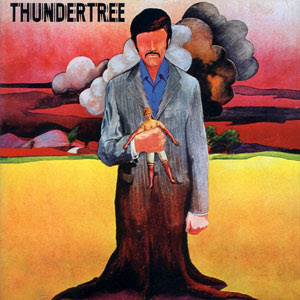 Thundertree does a pretty fine job performing a balancing act among several different styles. Their actual playing is firmly rooted in garage band aesthetics, but the use this to explore the then-burgeoning hard rock genre (think Steppenwolf specifically), psychedelic pop, and prog, especially on the 16 minute closing track. Even on the lesser tracks, they tend to shift gears into groovy trippiness. While this is not a great album, there are some fine moments that deserve your attention.

Things don't start well with "Head Embers," which unfortunately manages to spew out the "What I Like About You" riff several years before its creation. It's not Thundertree's fault, but it still annoys me. The hazy coda is still worthwhile, though. Fortunately "At the Top of the Stairs" is an awesome psychedelic pop song somehow getting Syd Barrett, Steppenwolf, and a groovy breakbeat all in one track and capping it of with some insane sound effects. "Summertime Children" also rates well as a ballad in the psychedelic pop sweepstakes. The other shorter tracks on side one acquit themselves well, although they don't stand out quite as much in my mind.

Side two throws us into a prog fantasyland with "1225 (in 6 parts)." I would probably equate Thundertree's brand of prog with Van Der Graff Generator. These guys don't have the instrumental prowess of your better-known proggers, so they focus on providing power. Truthfully, the 'six parts' would have done just as well as separate songs, but that means there is plenty of stylistic change. I doubt the accapella and glockenspiel section would have made the cut as its own track, not that I really needed it on the album anyway. I suppose that they may have been aiming for a side two of "Abbey Road" sort of thing, but there's no McCartney among this bunch.

There are some joys to be found on Thundertree's album (for me tracks two, three, and some bits and pieces of side two). Those of you with an ear for the transition between acid rock and heavy metal will dig this a little more than others, provided you can deal with some psychedelic pop as well. If it helps, I'd say that the cover art is a pretty perfect fit for this collection.