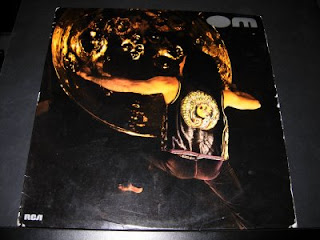 I'm not sure if I'm selling this one too well, but I do think it's mildly enjoyable. I feel a little guilty that Cosmic Michael in the previous post seems to have put in a lot of effort, and these folks seem to be falling over on chimes, yet I consider this to be the superior recording by far. For those of you desiring to explore the sound of 'om,' this should serve as an integral research tool as long as you can deal with the constant ringing.
Posted by Dr. Schluss at 1:28 AM

Somebody is obviously on the wrong blogspot...

I think it's amazing - on first listen I found it hard going but if you play it when you're in the right mood it has such a brilliant atmosphere.. definitely not for everyone though.

oh anonymous, you never cease to delight. great post,
OM is also the name of a really sick stoner/doom metal band with a similar spiritual and introspective musical quality.

Any chance you'd re-up this, Doc? I must be getting to it too late...