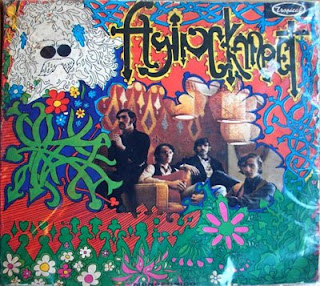 OK, lets start off here by being plain-out nasty. This is a pretty terrible album. The band can't play particularly well, the lead vocalist is even worse, and that puts the harmony vocals at some exponential kind of vile growth. On top of that, the band's songwriting chops are negligible as they are pretty much just working in terrible covers of stuff like "White Rabbit," "Twentieth Century Fox," and "Mercy Mercy Mercy" (that last one represents their trend to do even worse soul covers). Yet, I'm feeling charitable today.

You see, I just had a viewing of the timeless epic film, "Ghetto Freaks" (aka Love Commune, aka Sign of Aquarius). The film follows the blissed-out trials and travails of flower children weathering out a particularly frigid Ohio winter. Through their stoned apathy is a glimmer of productivity that results in a trickle of terrible art, you know, the kind of thing that all the earth mamas cheer for. I guess it's the only time all parties involved deliriously manage to get off the floor. So the Flying Karpets make me think of that kind of creation, except that they're from the significantly warmer Mexico. I'm really just giving these lovable stoners the equivalent of a cheek pinch as they do their best, which isn't nearly good enough. At least, I hope they were really, really stoned. Otherwise, there's absolutely no excuse for this.

If this kind of extroverted loathing sounds appealing, then this is indeed the album for you. But if you're goal is to hear adeptly-played artistic triumph then you might want to stay away from this one. I doubt this will see another proper reissue, so you could want this as a rarity (no you won't).
Posted by Dr. Schluss at 1:59 AM

Patience will reward you with a link.

Well, I typically try not to waste time writing about and posting albums I don't like, but I'm happy to occasionally make an exception.

I love these guys! ineptitude level of playing and trippiness. Loved it!

this excites me to an alarming extent ! thank you

this record was recorded in Mexico City, yes....but the musicians were from the USA....greetings: GZ

Is there any chance you reupload this treasure???