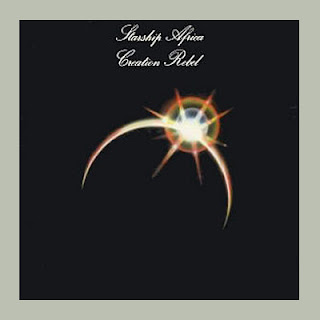 Dub is the wildly psychedelic offshoot of reggae that I have thus far pretty much ignored in my reviews. Of course if you're unfamiliar with the genre it wouldn't hurt to head for the better works of Lee 'Scratch' Perry or King Tubby. For now though we'll blast out of the Caribbean to find a pretty rare album from British dub producer Adrian Sherwood with his Creation Rebel project. Now, this band had several fine albums (some others of which we may eventually see here), but this is the one that got me hooked onto these guys and is a pretty wild trip into the reggae stratosphere.

Dub is synonymous with weird echoing sound and deformed proto-samples, but Starship Africa seems to take everything one additional step out there. As it should, the tracks rest on a rock solid rhythm, but all the audio effects and sounds drifting around here are fair game for an interstellar interpretation. The original album was arranged into two side-long groupings, Starship Africa and Space Moment. As far as the bedrock of the LP is concerned, most of the tracks are pretty similar. The layering of sounds on top of that is the main bit of creativity at work here, and it's some of the best I've heard in this sort of setting. Spaced-out alien voices, bubbling synths, and ringing percussion are combined and recombined in some pretty mind bending ways.

If you have yet to enter the world of dub, this isn't the worst introduction and this album serves as a fine litmus test for the genre. For anyone, you'll get to hear the best of a practically unheralded master of the form. If you have any love for dub, I think it's worth giving this a spin or three.
Posted by Dr. Schluss at 8:53 AM

The link is good, but you'll have to copy past the comment window or open it in a new window.

A great rip of an incredible album. Many thanks.

i look forward to hearing this. thanks for the chance.

Did you know the cutting and editing of the tapes was done blind with the tape flipped over? Impressive skills Mr. Sherwood!