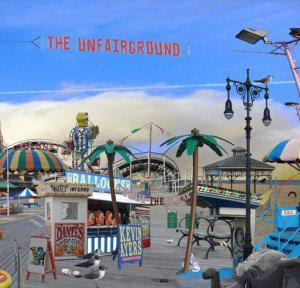 A musical slacker in the best possible sense of the word, Kevin Ayers has apparently been lounging on the beaches of Spain for the past 15 years strumming these songs on his guitar. Someone fortunately heard the quality of these songs and has been occasionally shoving Mr. Ayers into the studio for the past few years. The final product is surprisingly prime Ayers and comfortably sits on the shelf along with his great late 60's early 70's psych/folk.

The production distinctly harkens back to the sound of "Joy Of A Toy." There's a extremely diverse and organic collection of instruments on "The Unfairground." Fortunately the glam/prog experiments of the 70's and the thin, uninspired sound of his 80's recordings are nowhere to be found here. If anything, the well-done orchestrations present here suggests "Sgt. Pepper's" or "Forever Changes." Still, this is just icing on the cake as the core of the tunes here really is just Kevin and his acoustic guitar playing some of his best written tunes since, uh, well... ever. Ayers' also manage to dodge any signs of aging in his vocals. The fellow is well into his 60's, but sounds pretty much the same as he did in 1969 (maybe there's a slight touch of gravel, but it sounds fine). I'm sure it helps that Ayers has always sung in a warm baritone rather than a soaring falsetto or something.

Even on the classic "Joy Of A Toy," Ayers often let his ideas overstay their welcome and threadbare constructions would drone on for five minutes. Here we have fully realized compositions, so the production serves the songs instead of the other way around. I'd be willing to say that what would make up the first side on vinyl ("Only Heaven Knows," "Cold Shoulder," "Walk On Water," "Friends And Strangers") is Ayers' best run of songs ever and is even able to stand side-by-side with a classic like "Forever Changes." The second half of the album loses a little steam, but "Wide Awake" logs in one more essential Ayers tune.

With the first side presenting some of the best tunes of 2007, "The Unfairground" isn't just a comeback, but rather a complete reinvigoration. Hopefully given a couple more years on Spanish beaches, Ayers will find a little more inspiration in the back of his mind and bless us with a follow-up to this fine album. If not, this is the perfect coda for an underground psych superstar.