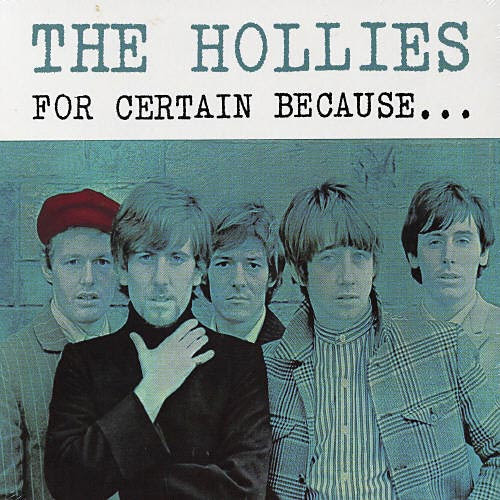 This album came out in late 1966, and unfortunately the Hollies were a little behind the times. For Certain Because... has a lot more in common with the pure pop rock of 1965 than of the wild experimentation steady building to a Summer of Love explosion. The Hollies do attempt a few more contemporary production touches here, but they mostly fall flat on their face and leave the convention rockers here as the highlights.

For Certain Because... starts off strong. "What's Wrong With the Way I Live" bursts straight out of the gate with a strong composition and plenty of the immaculate harmonies that were the Hollies' trademark. "Pay You Back With Interest" was a deserving medium size hit and "Tell Me To My Face" has a slight touch of bossa nova that works well.

The Hollies then spend too much of the rest of the album uncomfortably trying out random styles. "Clown" and "High Classed" are dripping with that kind of 60's cheese that keeps forcing images of Davy Jones into my mind. Meanwhile "What Went Wrong" includes pompous orchestration that sounds like it belongs in a 1960's Vegas awards spectacular. By trying to stretch their sound they end up just sounding hopelessly square.

Not that there aren't some bright spots later on. "Suspicious Look In Your Eyes," "Peculiar Situation," and "Don't Even Think About Changing" are all solid pop, although I'd imagine that they sounded dated even in late 1966. The Hollies only manage to stay on the crest of the wave of musical change on the closing track "Stop! Stop! Stop!" It's the only track here that I'd actually rate as being psychedelic, and it's a harbinger of the next two albums where the band would find a lot more footing to expand their sound.

Also included on this disc is the non-LP "On A Carousel." It's another track that would have been a perfect track for 1965; meaning once again that it's a solid pop track, but has little new to offer. We also get the stereo and mono mixes of everything. I wouldn't say that there's much of a difference, although my personal pet peeve concerning extreme stereo separation is very present in the stereo mix. I prefer at least a little percussion in both channels.

Those looking for the more psychedelic sound of Evolution or Butterfly will only find small hints of that sound here. If you're cool with some B-list 1965-style folk rock, you should end up with a couple choice tracks from For Certain Because...

Thanks a lot!!
The clown was sampled by Edan on the track Smile...