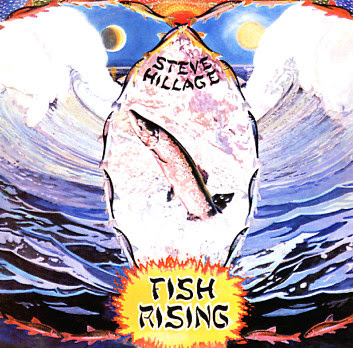 Steve Hillage was a phenomenal space guitarist (not that he's dead or anything; it's just that now he's more of an electronic guru) best known for being the axeman during Gong's prime, although he shines in lesser known projects such as Khan. In terms of sheer skill and interstellar trippiness, Hillage blows the far more famous space guitarist David Gilmour out of the water. For this particular niche of guitar music, Hillage really is the best there is.

This album was recorded while Hillage was still affiliated with Gong. The basic sound of this album seems to be an extension of Gong's You. In fact, he dragged along Gong drummer Pierre Moerlin, saxophonist Didier Malherbe, and bassist Mike Howlett along for the ride. This isn't to say that there aren't some major differences. While You drifts into extended grooves and synthesized ether, there is far more instrumental interplay and soloing here. I'd say that Fish Rising is much more of a tradtitional prog album than anything Gong ever did. For me, this is a tiny strike against Fish Rising as I'm not much of proghead, but it could very well be a positive for you. Also, a key component of earlier Gong is the strange humor of Daevid Allen and Gilli Smith. They are nowhere to be found here, and while Hillage has a quirky charm of his own, it doesn't come out as strongly in an atmosphere so reminiscent of Gong.

More annoying is the production. Hillage takes the production reigns himself, and while he would eventually become a fine producer, the sound here gets a little muddy. After hearing Moerlin's drumming with a crisp sound on Gong albums, it's a little disappointing to hear him smeared along the canvas. Keep in mind that this disc is very much a proper remaster, and is far from unlistenable, I just feel that this music would be best heard with a little more definition.

Songwise, the album is bookended by some prog epics. "Solar Musick Suite" and "Aftaglid" both clock in around 15 minutes and include some very extended instrumental sections. I prefer "Solar Music Suite" as it flows more and has a much less lumbering main riff than "Aftaglid." In the end though, both tracks tax my attention span a little bit. Sandwiched between is the short "Fish," the synth swirling "Meditation Of The Snake," and "The Salmon Song." "Meditation Of The Snake" recalls the more esoteric synth side of Gong's You, and that makes it winner in my book. "The Salmon Song" is a far more 'concise' prog rocker at eight and a half minutes, but it has the benefit of including a killer guitar riff.

I feel like Fish Rising was conceived more as a 'side project' to the mothership band of Gong. Hillage would sound much more committed on his second solo album after leaving Gong. Hillage did better soaring than grounded with a heavy prog sound. Just as a side note, I always get an image of midgets dancing around a tiny model of Stonehenge 5:44 into bonus track "Pentagrammaspin."

Thanks for this. Steve Hillage has long been one of the artists I was curious about, since I'm a big Gong fan. I had listened to "Green" before, but it was more in Jazz-rock vein. I still haven't listened to "Fish Rising", but it seems more in the space-rock/canterbury direction of early Gong (at least the titles suggest so!)

BTW, I'm interested in attending your private blog, because I usually don't have the chance to DL albums as soon as you post them. You may be sure I'll leave a comment for every single album I DL'ed ;) (my earlier comments are my proof!) I cannot write my e-mail here to avoid spamming, but I'll be grateful if you give me instructions for signing up ;)

keep up the good work

Very interesting synopsis, and I agree with you about the sound--at least on the vinyl. The CD sounds much better in my opinion. One of my fave Canterbury albums!

Unfortunately the file of the working link it can´t be opened.

Osvaldo, I DL'ed the same link (although I already have different -and enough!- rips of the album); it works, and opens. It only gives CRC fail error for the 1st track inside the covers folder (named "1975 - Fish Rising"); you can discard all those tracks anyway; the tracks in the main folder (named (Steve_Hillage) are better rips (made by LAME & that). If you're having another problem than that, try DL'ing the file once more...

You can also find the album in this post: http://avaxhome.ws/music/rock/progressive_rock/Steve_Hillage_Fish_Rising.html . lossless links are dead, but one mp3 (@320) link still works.

My dream birthdate/birthplace is definitely 1946 in Canterbury... i was born more than 40y too late and on the other side of the English channel... bummer!