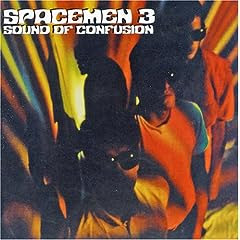 The 80's as many of you know harbored a psychedelic/garage revival. Solid bands like the Chesterfield Kings but out some very nice, although dated sounding albums reliving the raunched-out dreams of garage deviants. Spacemen 3, however, existed in a separate sphere. On their debut, Sound Of Confusion, the band clearly exists in a garage band line-up with bass, drum, a couple guitars, and sneering vocals, and they had the playing chops of your average garage band (which is to say not much). Conceptually though, Spacemen 3 were something else entirely and even here don't sound dated. On top of the garage compositions present on the album (originals and some choice covers), the band has adopted a Velvet Underground stomp and the industrial drone of bands like Suicide and Throbbing Gristle to basically create a new form of psychedelia. This is definitely evocative of the "bad trip" and a creepy narcotic buzzing. And it's all the better for it.

At this point in time, band leaders Jason Pierce and Sonic Boom were working very much in tandem and it's difficult to make out whose contributions are what. Their songs are relatively simple, but wonderfully direct. "Losing Touch With My Mind" is a great stomping opener which is as good an introduction to the group at this point as anything. Also standing out as a highlight is "O.D. Catastrophe," which lives up to it's name and is an early attempt at the band's epic drone.

Spacemen 3 also try their hand at a few cover tracks, stamping their own identity on the songs as a good cover version should do. They alter the 13th Floor Elevator's "Rollercoaster," eschewing Rocky Erickson's wildman wail and the pulsing electric jug for a narcotic rush. It's difficult to talk about this band without making drug references, as the band itself basically begs for them. They sound pretty seedy and dangerous most of the time. Girls, don't take these fellows home to mom; they'd probably have an overdose fit and then steal your jewelry to sell for more scag. Personally, I love their music, but I'd be scared to be in the same room as them (unless it's a concert hall) judging by the sound here.

They also do a fine version of the Stooges "Little Doll." It still sounds more like Spacemen 3 than the Stooges, but the desperate proto-punk sound of the Stooges is a little closer to what these guys do. I guess that the difference is that Spacemen 3 drain the song of it's swing and syncopation, focusing the song's rhythm like a needle into the vein (dammit! there I go again). There's also a cover of Juicy Lucy's "Just One Time" renamed "Mary Anne," but I have to admit that I'm not familiar with the original. The version here is pretty groovy on its own.

Stressing their arrangements as much as anything else, Spacemen 3 would often rework their songs in very different ways. Here we get an early version of "Walking With Jesus" from the same-titled EP as a bonus track. Later it would become a floating, acoustically interstellar track, but here we get it in a primitive sounding pummeling. It's not better or worse, just different, and very interesting. There's also the 17 long minute of "Rollercoaster" which adds some more sound effects, cuts out the drumming, and of course gives the listener far more time to succumb to the tracks distorted drone, if that's what you want to do. It's the best dose of Spacemen 3's trademark hypnotism present on the disc.

Spacemen 3 would perfect their very own form of psychedelia on their next two albums. The tracks here are a little more informed by the past, but as a good debut should, it provides a great entry point for the band. I think Sound Of Confusion is often underrated in Spacemen 3's catalog, but I feel it's just as essential as one of their great albums.

Just because I hate rapidshare so much! Once you download one file you have to wait up to 90 to download another. Annoying!

cool blog, let me know of any shows i can play in Brazil December / January, I played with some guys of Spacemen 3