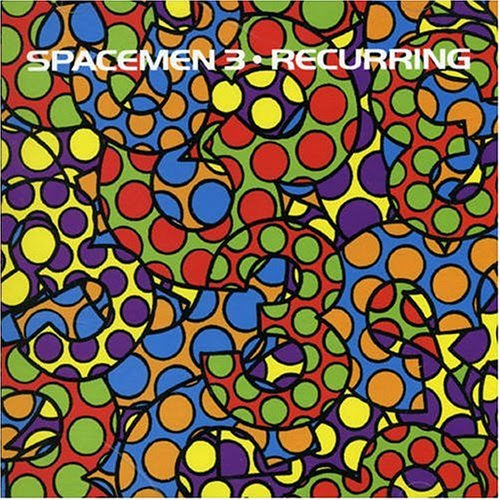 Recurring is really a Spacemen 3 album in name only. Once the 90's had rolled around, Sonic Boom and Jason Pierce's relationship had become so acrimonious that the two wouldn't even enter the studio together. In fact, I don't think they both appear on any of the album's tracks. Thus, we get sort of a weird double EP with Boom's tracks on side one and Pierce's tracks on side two. Even the backing is different as Boom uses some friends and a few folk that would follow him on to his next project, Spectrum. Pierce's backing is in fact the first line-up of Spiritualized. I guess Spacemen 3 simply had a contract to finish. Let's look at this as two separate collections.

I thought Sonic Boom supplied the better tracks on Playing With Fire (although only by a hair or two), but he sounds positively wasted here. Tracks like the opening "Big City," "I Love You," and "Why Couldn't I See" include some lame automated-sounding backing and a half baked 'Madchester' influence. Unfortunately, that influence comes through like a second-rate Inspirial Carpets. To add insult to injury, his vocals are a big cut below previous performances and he comes across as drug-addled bored rather than surreal and altered. With some different arranging and performances, these would've been a lot better. Maybe that's where Boom needed Pierce. I can't really say that for "Just To See You Smile," which appears in a vocal and instrumental version. Actually, it's a fine song with great production, but it was also a fine song with great production on Playing With Fire, where it was called "Honey" and sounded EXACTLY THE SAME.

Fortunately for this album, Pierce came in with his game face on. His tracks with the soon-to-be Spiritualized take the gospel vibe of Pierce's Playing With Fire tracks and amp up the production and dreaminess. With Boom out of the picture, Pierce goes for an airy, atmospheric drone rather than Spacemen 3's previous pulsing drone (not that there's anything wrong with a pulsing drone). Blessed with some great organic performances, this side of the album seriously contrasts with side a's badly programmed beats. The tracks on this side are uniformly great and serve as the not-so-missing link between Spacemen 3 and Spiritualized.

If you're new to this album, it would probably be in your best interest to skip to track 8 in case you have trouble stomaching Boom's songs. Or you might try the Mudhoney cover of "When Tomorrow Hits" on track 7 which harkens back to the Sound Of Confusion-era style. Mr. Boom manages to come through ok on that one.

hmmm, call me an idiot! but i can't find any dl-links to these nice gems :-/

I definitely agree that JP wrote the better tracks here (as I think he did with most Spacemen albums). But I certainly don't think people should skip past Boom's songs. 'I love you', 'Just to see you smile' and 'Set me Free' are pretty damn great tracks, they sound suprisingly melodic and dreamy for Boom. I actualy watched an interview saying he wanted to save his "Happy songs" for the Spacemen 3 album and get the sad ones out with Spectrum. However, 'Big City' is much too grating for my tastes, and 'Why Coulnd't I see?' is a melody-less nightmare. But all is saved with Jason's side. Every track is a mind blower, Especially 'Feelin Just fine', 'Hypnotized' and (on the reissue) 'Drive/Feel so Sad' is a marvelous piece of euphoric space-blues. Great Album.

Doc Schluss? How can I get to listen to this album? I can't find the link. It this one of those flashbacks they warned me about in health class? George Trakker

I'm so sick of people dismissing this album as a pair of eps stuck together. It's probably the best thing that band ever did. It's their most diverse set and displays some of their best songwriting. Oh, and Pierce and Kember both play on 'When Tomorrow Hits' and also: THIS ALBUM SOUNDS NOTHING LIKE FUCKING MADCHESTER.

It's definitely the best album the band ever made. I've had it since it came out and still listen to it regularly. I also dismissed Boom's side at first (probably for years actually...) but now think it's much superior to Jason's over-earnest offering. Boom sounds wasted yes, but very happily so. Give it a few years and you'll agree with me...

I agree with Adrian,
the closest this album, comes to any form of the 80's 'Madchester' sound is due to 2 links, guitars and the the madchester sound coming from an LSD summery haze, with a crowbar & hammer you could FORCE the 2 together.

And re the Boom 1 side / Pierce the other, hmm :) yeah, it was great marketing for their future projects...
Kembers not reaching the heights of Spiritualized (his lyrics aren't so hot, better off using them as 1 line 'mantras' and letting his music do the talking, which it does extremely well.)

Either way this is a great album.
1 of the few artists collections i'll put on play and lay back for a day n drift away... hey hey.

There best album? Hard to say but certainly How ALL bands should end, on a HIGH quality/peak of their 'sound'.

THX7168 and all others who's efforts led me to finally be able to listen to this fabulous album!!A million times thnx and hope to see/experience u forever on the other side of my earth mind, once the time has come that time has gone forever..;D
(PS.: I bought all the stuff I could get my hands considering the back catalogue of Spectrum/sonic boom/E.A.R./-/Spacemen3/-/Spiritualized. As for "recurring" it kept eluding me.Thxxx!)

Hi, "Sound of confusion" is a great release, don't know this one. I'd to give this a try but link is broken, could you please refresh ?
Great blog! Keep it on!

Nah, if yr going to have a trip-o-meter... Recurring is easily a 5. it's a 5 for so many reasons. It's got both sides of the coin man. Kember wrote a bunch of happy songs and Pierce wrote a bunch of sad songs and a single. "Hypnotized" being one hell of a single at that.

However the strongest part of the of the album is it's ecstatic opener.
If you know psych... you know the key to the mystery is repetition and the subtle stimuli bloom from from the comfortable structure which can end up anywhere compared to where it started. Point is, "Big City" 10 minutes of the finest use of Vox percussion tremolo giving you that Blondie "Heart of Glass" sound in a progressive pop ode to Kraftwerk... oh man that shit rolls so hard.
"I love you too, I love you too..."
Not to get all hippie with it, but you sit back with yr buds listening to that song and you realize.. "
Man, that's the reason why we took this shit to begin with."
Aside from just those two songs, this album really gives SO much more. Recurring is really more like the best Spiritualized album cause Peter Kember still gets songs on it. In my mind this masterpiece is topped only by Loveless and Sister in it's era.