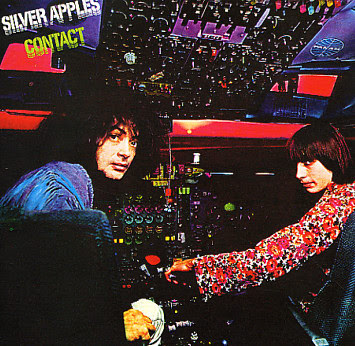 Silver Apples second album, Contact, seems to be of a pair with their debut album in most respects. It's another fine example of primordial electronic rock, but the band did manage to refine and shift a few elements to keep things interesting. First of all, the band's songwriting has kicked up a notch. There are more rhythmic and melodic variations to distinguish the song, although the band does retain it's basic drone. Even more obvious is the increased presence of Simeon's, uh, "Simeon" instrument. There is a much thicker wall of electronics saturating the album while the production of the instrument is also much cleaner. Simeon also throws a banjo into a few tracks like "Ruby" and "Confusion," but I'm not sure if electronic bluegrass was the best idea. We'll count those two as misses.

Much better ideas crop up on the opener "You And I." With the new forest of oscillators in place, Simeon intones some truly cosmic lyrics to a catchy, yet unpredictable melody. Even better is "I Have Known Love," which is one of my favorite songs pretty much in general. The very tripped out lyrics like "I have learned what truth denies/I drank the teardrops from her eyes" are apparently courtesy of Simeon's then-girlfriend. The pulsing electronics here are top notch, and I find the slightly out-of-tune harmony vocal strangely charming. This is the quintessential Silver Apples track.

The band does better with long forms songs here too. There are four songs present hanging around the six minute mark, and they're all better than "Dancing Gods" off of the last disc. "Gypsy Love" and "You're Not Fooling Me" manage this by successfully stretching out the band's trademark drone. "Gypsy Love" sounds what would've been a fine garage punk song a few years earlier, bludgeoned by the electronic prism here. "A Pox On You" is more on the creepy side of things, with the "Simeon" throwing out some horror movie tones into the mix.

The closing "Fantasies" is a mixed bag. Much of the instrumental work is truly awesome (especially the drumming), while on the other hand there is a solo of "Nanny Nanny Boo Boo," which is probably never a good idea anywhere. Also, Simeon rants along in a badly recorded vocal track which I could probably do without. Oh well, maybe you can play some mental games and try to tune him out for this one.

Contact includes enough evolution to act as an interesting counterpart to the debut album. Basically the tracks here are either better or worse than the ones from the first disc. Make what you will.

Hi Dr. Schluss!
I found both Silver Apples LPs back in 1969 in a cut out bin for 33 cents (US) each. I was amazed by the sounds but didn't really understand how they did it. I actually thought they modified a washing machine and possibly a vacuum to make the sounds and just sang over them! So this was my introduction to electronic music.
Love your blog!
Steve

Dr. S,
Thanks for the Shiny Synths!