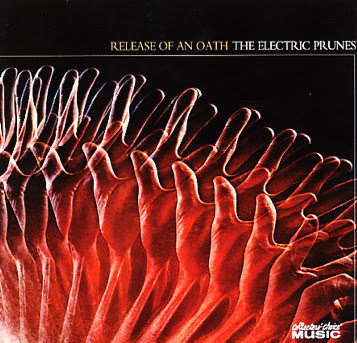 Pretty much dipping into the same well as Mass In F Minor, Dave Hassinger and David Axelrod worked out some traditional Jewish chants for a second religiously themed concept album. This time out though, there really were no actual Electric Prunes present. Hassinger and Axelrod simply had rights to the established name, and constucted a new core band along with a compliment of L.A. session players for this one. Even more than Mass In F Minor, Release Of An Oath should probably be labeled with David Axelrod's now cult-worthy name.

The album remains a strong effort, and there's a touch more melody and assimilation of the themes into the arrangements. "Holy Are You" in particular manages to equal and maybe even top F Minor's "Kyrie Eleison." Maybe the Jewish melodies just have a little more meat on the bones (edit: Wikipedia says only the first track is Jewish; the rest is actually based on orthodox Christian prayers). This too is a short album (24 minutes) and doesn't have a ton of variation. Axelrod is very much working in the same style of hip-hop precursor drums, wailing acid guitar leads, and bombastic swoops from the orchestra. Yes, it still sounds good, but there's nothing new to really distinguish the album from the last. According to the liner notes, Mr. Axelrod sort of got shoved into making this one, so it may just stem from a workmanlike effort and a lack of inspiration.

More annoying for me is that the chants on Release Of An Oath are all sung in English. I thought that the Latin-sung chants of F Minor added a mysterious atmosphere to the proceeding that is lost here. It brings everything a small step closer to being a real religious rock album instead of a tripped out approximation of one (I prefer the latter if you're keeping count).

Although laden with a few shortcomings, Release Of An Oath does make a nice pair with Mass In F Minor. I suppose it's only fair that we get a psychedelic synagogue to go along with the cathedral. These two albums also make a nice rock introduction to David Axelrod, whose first three albums we'll visit in the next few posts.

dr.schluss,
time has come for me to thank you properly for this blog.
i uploaded a brasilian album called "arrigo barnabé - clara crocodilo" for you.
it's shurely a must-have for any collector. arrigo's music is a mix of schoenberg's dodecaphonia + jazz + brasilian music + sci-fi comics-based lyrics [!!!].
it's the story of an office-boy who needs money to get his hot ex-girlfriend back. so, he volunteers for scientific experiences, turning into a part crocodile/part tranvestite [!!!!!] creature, chased by the brasilian army [!!!!!!!]. it' work of a genius, hope ya like it. greets,

Thanks for the link! I'll check it out.

what a nice blog! my congratulations!
it seems somebody is not giving you correct credit. many links are already down, like this one, as well as at least the two solo albums by David Axelrod.

keep up your good site and many thanks.

Thanks but I can't find the link

all three links GONE
please can someone upload on zShare and/or MegaUpload?
They don't disappear so fast from there ...........

Is this a re-release?

Thanks for your efforts!

Yeah, the "Buy Me" link will lead you to last year's re-release of the Axelrod/Prunes albums and Pride. It's a pretty swank collection. I would recommend it without reservation.